[Satnews] Sierra Nevada Corporation (SNC) has delivered 11 ORBCOMM Generation 2 (OG2) satellites to the launch site at Cape Canaveral Air Force Station, Florida, for ORBCOMM’s upcoming OG2 Mission 2 launch aboard the SpaceX Falcon 9 rocket, which is targeted for mid-December 2015.  As the prime contractor for ORBCOMM’s OG2 satellites, SNC is responsible for the design, manufacture and integration of the OG2 satellites in the constellation. 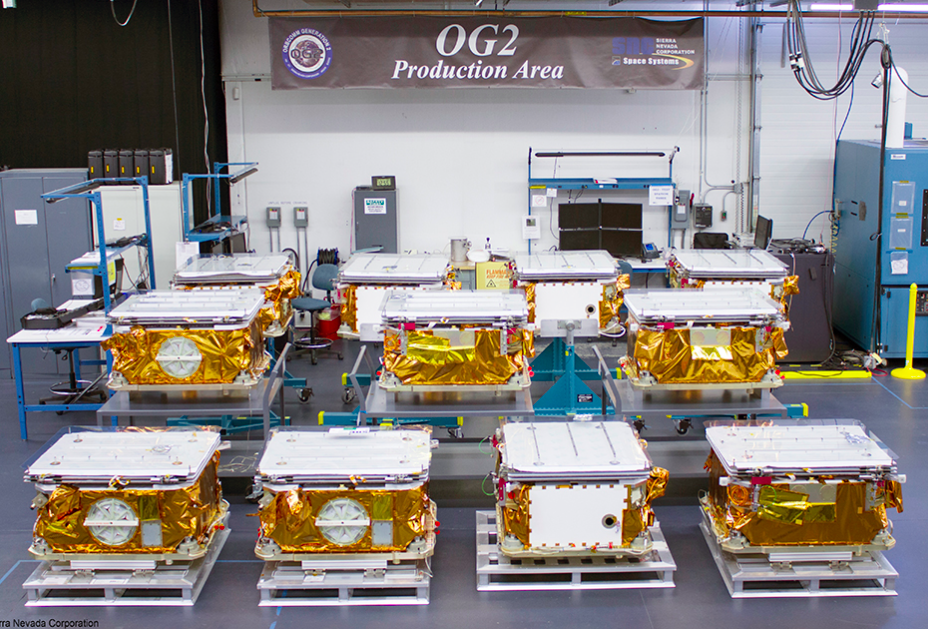 Eleven OG2 Mission 2 Satellites at SNC's facility in Colorado Prior to Shipment to Cape Canaveral, Florida.

“SNC looks forward to completing the OG2 constellation with the delivery of 11 flight-proven and highly-capable satellites for the Mission 2 launch,” said Mark N. Sirangelo, corporate vice president of SNC’s Space Systems. “These 11 satellites were integrated and tested in a high-volume production environment, demonstrating our ability to efficiently integrate and produce constellations in this class. In addition to the design and build of all OG2 satellites, SNC will also support launch, in-orbit testing and deployment of these satellites simultaneously from our Satellite Operations Center in Louisville, Colorado.”

SNC successfully completed the Pre-Ship Review in late October 2015, and soon thereafter, all 11 satellites were shipped to the launch site, initiating launch operations. During launch operations, with the support of SNC engineers and technicians, the OG2 satellites will undergo further post-transport testing, fueling and inspection. This approach builds upon the OG2 Mission 1 launch and deployment of six spacecraft in July 2014.  Following the launch and the completion of in-orbit testing, the spacecraft will be incorporated into ORBCOMM’s global machine-to-machine (M2M) communications network, consisting of the Mission 1 OG2 spacecraft currently in operation as well as ORBCOMM’s Generation 1 (OG1) spacecraft.  ORBCOMM’s ubiquitous M2M network provides tracking, monitoring and control services for remote and mobile assets in core markets including transportation and distribution, heavy equipment, industrial fixed assets, oil and gas, maritime and government.

“ORBCOMM and SNC are pleased to be in the final stages of the launch and test of our advanced next generation OG2 satellites,” said Marc Eisenberg, ORBCOMM’s chief executive officer. “We expect to be offering our customers in Q1 2016, an enhanced, more efficient communications network, significantly increasing network capacity, coverage and performance, including an Automatic Identification System (AIS) payload on every spacecraft.”

All OG2 spacecraft are based on SNC’s flight-proven SN-100 satellite bus, which can be tailored to support a variety of applications, including communication, Earth observation, weather and space science. The SN-100 is designed for a five-year-minimum life and utilizes a modular payload deck that can be rapidly integrated and tested using highly automated scripts to test all functions. This allows the baseline satellite to be quickly and cost-effectively configured to meet the needs of many customers.