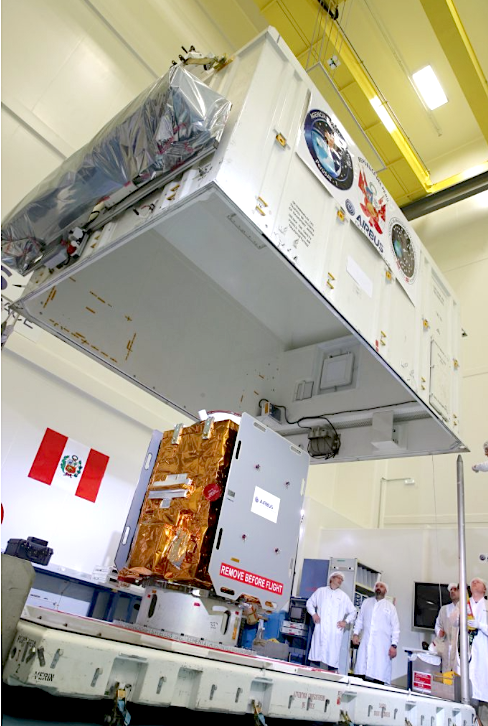 Airbus Defence and Space has completed integration of PerúSAT-1, Peru’s first Earth observation satellite, built in less than 24 months. PerúSAT-1 was ordered by the Peruvian government for its national space agency, CONIDA, in 2014. PerúSAT-1, based on the highly flexible, compact AstroBus-S platform, will observe Earth via a revolutionary silicon carbide optical instrument system at 70 cm resolution.

Peru's first Earth observation satellite, PerúSAT-1, is on its way to the European Space Port in Kourou (French Guiana) as it readies for take off aboard a Vega launcher on September 16 (03:45 CEST). Built in less than two years, the 400 kg satellite will deliver images from its orbit at 694 km to be used in the areas of land management, border control, and drug trafficking.

PerúSAT-1 is based on the flexible, compact AstroBus-S platform and will observe Earth through the latest generation of a silicon carbide optical instrument, with a 70 cm resolution.  It may also be used to support management of humanitarian aid and evaluation of natural disasters (floods, forest fires, landslides, erosion).

PerúSAT-1 proves that a powerful and sophisticated Earth observation satellite can be built in less than two years. AIT (Assembly Integration and Test) of the instrument was completed in about eight months, with the platform construction phase, satellite construction, and technical and operational system validation taking only five months each, respectively.

This success was made possible by the creation of the “Projects Factory©”, a new and more integrated working organization in the Space System business unit. This new way of working brings down development and construction lead times for satellites up to 500 kg and optimizes their costs and schedule delivery, without impacting quality.

The program also includes the construction of the Centro Nacional de Operaciones de Imágenes Satelitales del Perú (CNOIS) hosting the ground control segment for image reception and processing developed by Airbus Defence and Space, as well as a complete technology transfer program for the Peruvian engineers and technicians (from advanced instruction in space technologies to satellite operation and the development of appropriate imaging applications) and the supply of images from the Airbus Defence and Space fleet of optical and radar satellites.