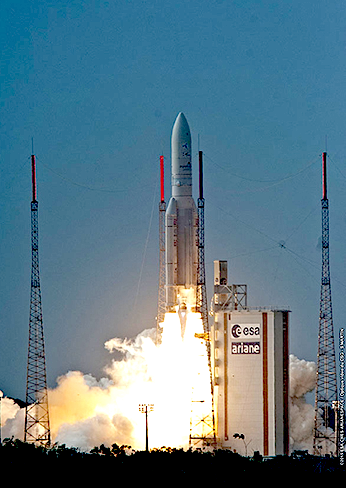 [SatNews] Ariane 5 has been successfully launched from Kourou, French Guiana, for the 64th time in a row, confirming the reliability of the European launcher. This was the 222nd Ariane flight and the 78th Ariane 5 launch.

“The history of the Ariane program is closely linked to that of Airbus Defence and Space; the future of Ariane is therefore also inextricably linked to our company, and will continue to be via our subsidiary Airbus Safran Launchers,” said François Auque, Head of Space Systems. “The 64th successful launch in a row confirms the outstanding capabilities of our launcher teams and our ability to use our experience to implement the industrial organization for future European launchers. Our aim is to continue being the architect of one of the greatest European industrial success stories.”

Airbus Defence and Space is the single prime contractor for the European Ariane 5 launcher, one of the largest programs in the world, since 2003. As a 50 percent shareholder in Airbus Safran Launchers, the company currently oversees an industrial network that brings together more than 550 companies (more than 20 percent of which are SMEs) in 12 European countries. It also manages the entire industrial supply chain, from the manufacture of equipment and stages to the complete integration of the launcher in French Guiana, in line with the customer’s specifications. Representing cutting-edge European expertise, the Ariane 5 launcher has been specially designed to inject heavy payloads into orbit.