[Satnews] As we close the books on 2015, Government and Military planners are starting the process of designing next-generation government and military satcom networks—with many questions: how much commercial, how much jam protection and resiliency, and fundamentally, how much do we spend... or pay for it?  Amongst all of these plans, they almost all include a role for the satellite communications industry—be it from providing end-to-end managed services to ‘flying the birds.’

According to NSR’s Government and Military Satellite Communications, 12th Edition, there is a clear place for commercially-sourced capacity with upwards of 600 transponders of FSS capacity and 80 Gbps of HTS capacity demand across the market projected by the end of 2024.  Meanwhile, milsatcom capacity on key systems for key countries reaches slightly under 40 Gbps under currently planned systems.  Most of this capacity will be from WGS to U.S. and partner countries.  Additionally, nearly all European milsatcom systems will require replacement by the mid-2020s.  With only France making significant steps in determining components of their next-gen architecture, the role of commercial industry in these next-gen systems continues to be on the table and in discussions.  However, with all of the competing participation models within Europe and the U.S. (the “Skynet model”, XTAR-like, the U.S. Pathfinder programs, or the emerging LuxGovSat-style to name a few), it is highly likely we will only see more flavors coming into market.  All said, expect more variety in the manner or style of how governments and industry interact across the Gov and Mil satcom industry, not less. 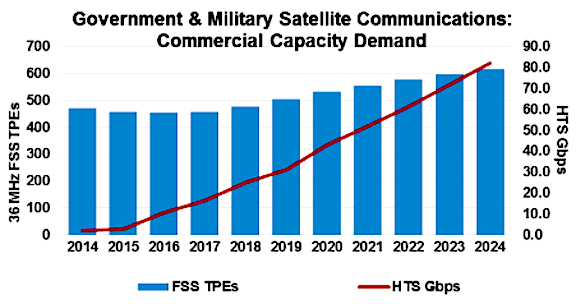 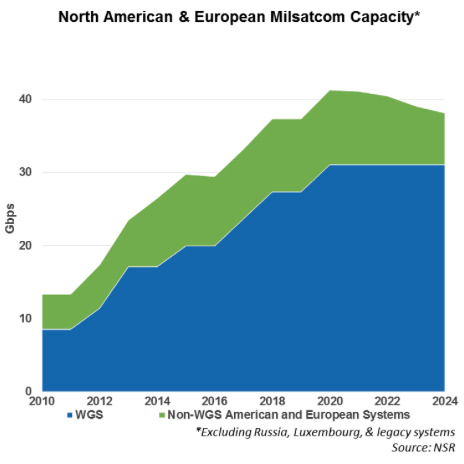 However, that is the “2.0” for gov’t/mil. satcom; for “1.5”, it is the ‘flying the birds’ outsourcing that has gained the attention of the satellite industry.  The attention has become so great that Intelsat General has an ad running that concludes with, “We can fly your satellites for less”; a bold statement indeed.  Yet, a recent interview by U.S. Gen. John Hyten hinted in maybe a slight shift in thinking in the ‘outsource-ability’ of some of these jobs as it relates to operating within a contested RF-environment for U.S. forces.  With a new focus on training-up and redeploying experienced personnel to the ‘front line’ positions of operating the satellites, does that throw another wrench into the commercial versus military debate?  It would seem that if these statements are taken at face value, there is an acknowledgement that the current paradigm of (at least) U.S satellite operations is not working.

In addition to a renewed focus on bringing experienced personnel back into operational roles, jamming and operating in a contested RF environment is amongst the top bullet points for next-gen system designers.  During the interview with Gen. Hyten, he said that as of today, the U.S. is its own ‘worse enemy’ when it comes to jamming of its satellites.  Solving the training problem is far more straightforward than the technical challenge of deploying new ground and space infrastructure; yet it still points to a potential shift in thinking of getting service personnel more involved, not less.  However, operating within a contested RF-environment remains one of the ‘new differentiators’ for commercial capacity coming into the gov and mil markets.

With the likes of Eutelsat’s Quantum platform, or ground infrastructure developments from companies such as Thales or Hughes coming into the market over the next ten years (just to point out a couple of examples), commercial capacity will be able to ‘check more boxes’ on gov and mil planner’s list. The main question will be: “if the mindset has changed enough to fully capture the value proposition some of these new commercial technologies are bringing to market, are we ready for GovMilSatCom 2.0?”