Due to nasty weather in Japan an experimental launch of a modified SS-520 sounding rocket to place a CubeSat, TRICOM-1, into low Earth orbit was scrubbed. 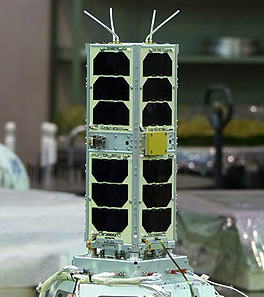 This one-off demonstration mission, flight designation SS-520-4, would hope to prove the concept of using a minimally-modified sounding rocket to place small satellites into orbit. The mission was to lift off from the Uchinoura Space Center at 08:48 local time (23:48 UTC on Tuesday) and, if it proves successful, will mark a new record for small rocket launch capability.

The TRICOM-1 satellite is a CubeSat, carrying a communications experiment and cameras for Earth imaging. Both IHI Aerospace and Canon are interested in potential partnerships with the Japan Aerospace Exploration Agency (JAXA) on the development of rockets to launch small satellites, and the launch will gather data which could aid these programs.

The SS-520 is a two-stage solid-fueled sounding rocket, designed to carry research payloads on suborbital missions to altitudes of around 800 to 1,000 kilometers (620 miles, 540 nautical miles). For the mission the vehicle has been modified with the addition of a small third stage to inject its payload into a low Earth orbit. The first stage of the SS-520 is based on the S-520 rocket, with a smaller second stage mounted atop it to increase the maximum altitude the rocket can reach on suborbital missions. Fins at the base of the rocket provide spin stabilization.

SS-520-4 will make the third flight of the SS-520, which first flew on February 5, 1998, from Uchinoura and made a second launch in December 2000 from Svalbard, Norway, carrying out geomagnetic research missions.

A rhumb line control system using gaseous nitrogen thrusters mounted in the interstage between the first and second stages is used to reorient the vehicle during a coast phase between first stage separation and second stage ignition, firing as the vehicle spins to change its attitude by precessing its rotation. For the SS-520-4 mission the third stage and payload are mounted within the rocket’s standard nose cone.

The S-520 is used by JAXA, and its predecessor the Institute of Space and Aeronautical Science (ISAS), for research launches which typically reach an altitude between 200 and 400 kilometers (124-249 miles, 108-216 nautical miles) and was first used in 1980. Thirty have been launched, with one failure which occurred in 1995.

If the launch is successful, SS-520-4 will become the smallest rocket ever to deliver a payload into orbit. The only smaller vehicle, both in mass and length, to attempt an orbital launch was the US Navy’s NOTS-EV-1 vehicle, also known as Pilot. Air-launched from an F4D-1 Skyray, Pilot made six orbital launches and four ground-launched suborbital test flights between July and August 1958; all 10 launches failed.