[SatNews] ...thank you ....honoring us with their trust by choosing our launch services for two vital programs for European citizens. 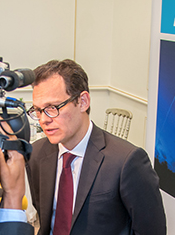 Since the Treaty of Lisbon, the European Union has asked the European Commission to define and apply the EU's space policy.

As a user and beneficiary of space technologies, the European Union conducts two flagship programs in which Arianespace plays major roles:

"I would like to thank the European Commission for honoring us with their trust by choosing our launch services for two vital programs for European citizens, namely Galileo and Copernicus," said Stéphane Israël, Chairman and CEO of Arianespace. "The three launchers used for the deployment of these two programs, Ariane, Soyuz and Vega, show that Arianespace's family of launch vehicles is perfectly suited to providing independent access to space for Europe. Arianespace is fully committed to providing the best possible service to the European Union, which is now our leading governmental customer, via contracts awarded through the European Space Agency."