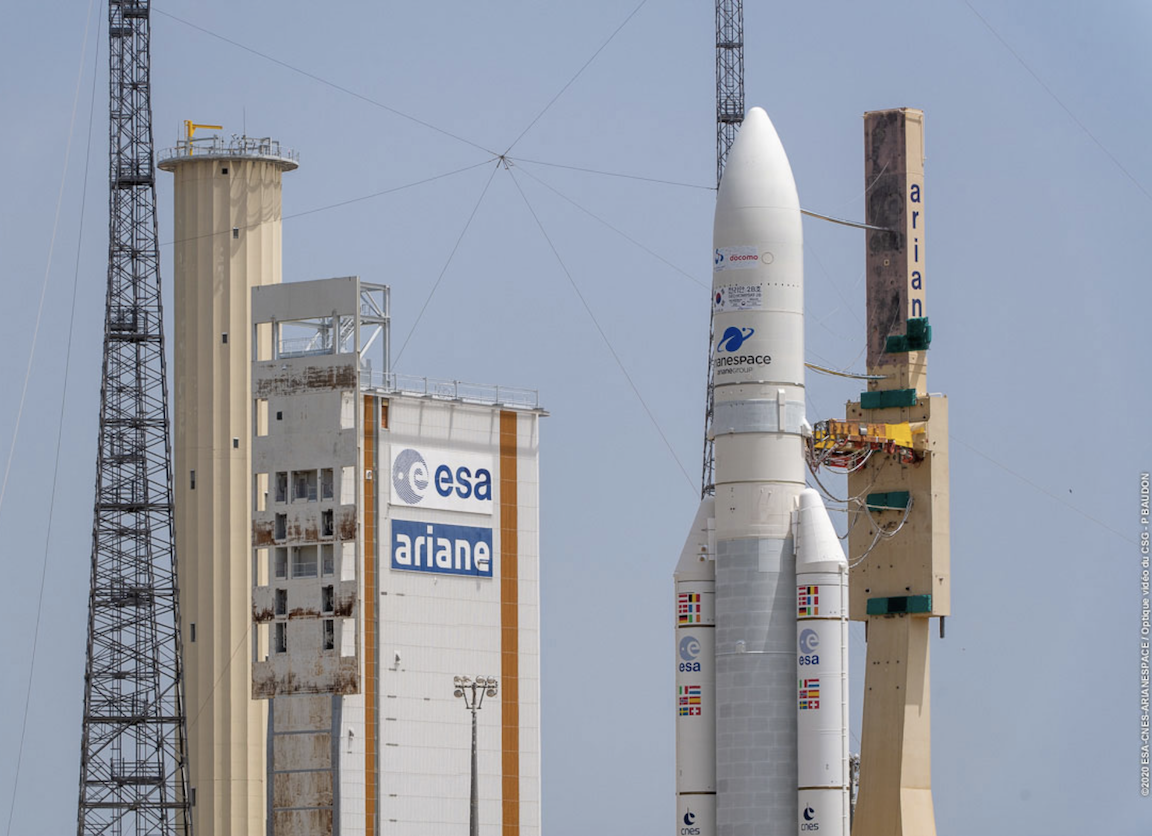 The Ariane 5 that will lift off on Arianespace’s Flight VA252 nears completion of its transfer from the Spaceport’s Final Assembly Building to the ELA-3 launch zone.

Getting ready for their launch tomorrow, Ariane 5 is now in the launch zone...

Arianespace has delivered another Ariane 5 to the launch zone at Europe’s Spaceport in French Guiana, clearing the way for its February 18 mission with two satellite payloads: SKY Perfect JSAT Corporation’s JCSAT-17 and GEO-KOMPSAT-2B for the Korea Aerospace Research Institute (KARI).

Riding atop a mobile launch table, Ariane 5 was transferred from the Spaceport’s Final Assembly Building —where payload integration occurred — to the dedicated ELA-3 launch complex. The heavy-lift vehicle is delivered to Arianespace by ArianeGroup as production prime contractor.

With this rollout completed, the final countdown will begin for a February 18 liftoff at the start of a 1-hr., 2-min. launch window opening at 7:18 p.m. local time in French Guiana.

Tomorrow’s mission is designated Flight VA252, and has an estimated payload performance of 10,109 kg. – a total that factors in the liftoff mass of its JCSAT-17 and GEO-KOMPSAT-2B spacecraft passengers, plus the dual-satellite dispenser system and integration hardware. Both passengers are to be deployed into geostationary transfer orbit during a 31-min. flight sequence.

Riding in Ariane 5’s upper passenger position is SKY Perfect JSAT Corporation’s JCSAT-17, built by Lockheed Martin Space. This relay platform is designed to deliver flexible, high-bandwidth communications for users in Japan and the surrounding region from an orbital position at 136 deg. East.

GEO-KOMPSAT-2B, which is located below JCSAT-17 in the launcher payload arrangement, was developed by the Korea Aerospace Research Institute (KARI). It will conduct Earth environment monitoring and ocean monitoring missions and is to be stationed at the 128.2 deg. East orbital location. 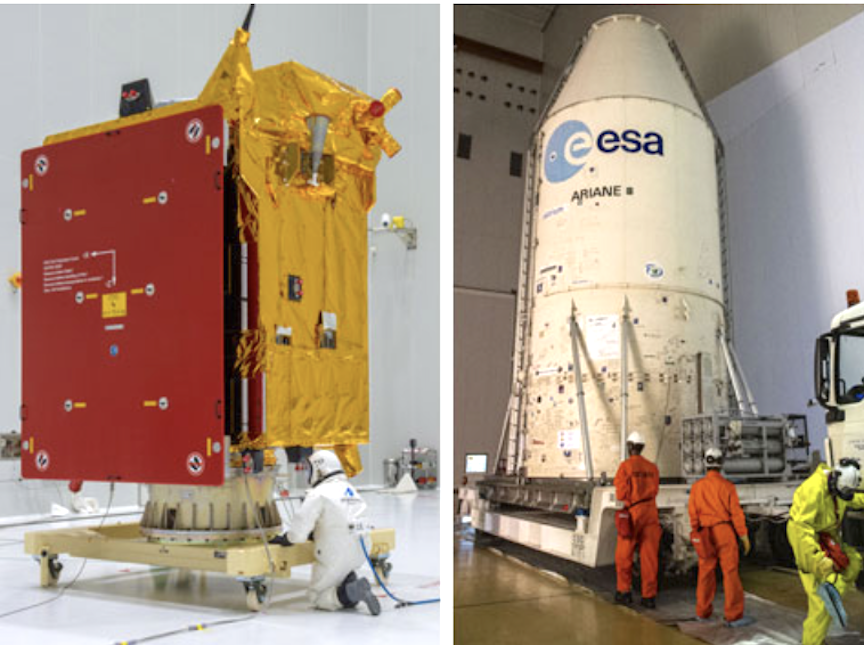 GEO-KOMPSAT-2B is “topped off” in the Spaceport’s S5 payload preparation facility (at left), followed by the satellite’s transfer to the Ariane 5’s Final Assembly Building (at right) – where this KARI-built satellite will be integrated on the launcher.

It will be Arianespace’s second Ariane 5 flight in 2020 from the Spaceport, following the January 16 success that delivered the EUTELSAT KONNECT and GSAT-30 satellites to GTO. Arianespace’s fast-paced launch schedule for 2020 also included a medium-lift mission with Soyuz from Baikonur Cosmodrome in Kazakhstan, which was conducted with its Starsem affiliate on February 7 to deploy 34 satellites for OneWeb’s next-generation constellation. 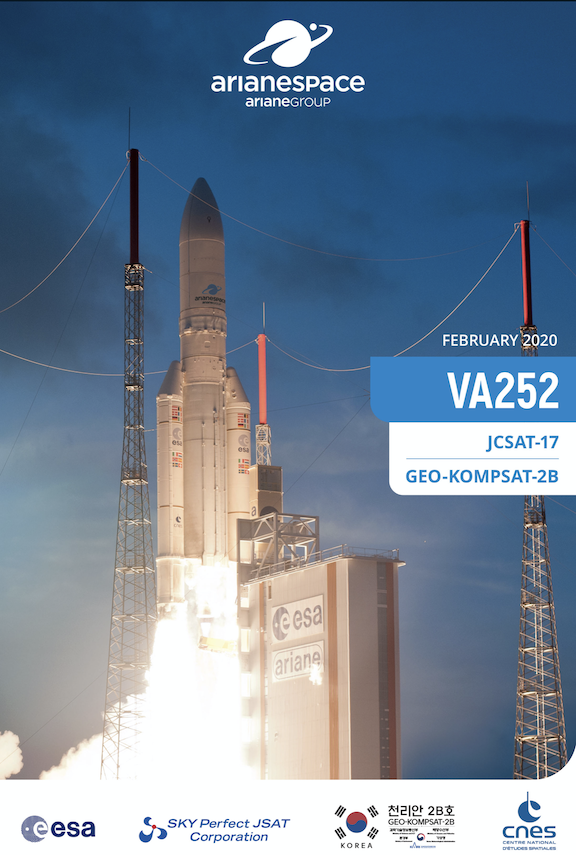 Produced by the Korea Aerospace Research Institute (KARI), GEO-KOMPSAT-2B will be installed in Ariane 5’s lower payload position, to be deployed as the second passenger during this mission.

After arriving at its operational slot in geostationary orbit, the spacecraft will be used primarily for monitoring the oceans and the Earth’s environment.

The mission’s other passenger, JCSAT-17, will ride in the upper position on Ariane 5. Built by Lockheed Martin for operation by Japan’s SKY Perfect JSAT Corporation, it will deliver telecommunications services across a coverage zone that includes Japan and areas extending 200 nautical miles from the coast. JCSAT-17 will be the 21st SKY Perfect JSAT satellite to be launched by Arianespace. This geostationary communications satellite will deliver flexible, high-bandwidth communications to users in Japan and the surrounding region. JCSAT-17 will also be the 32nd satellite launched by Arianespace for Japan.

The heavy-lift Ariane 5 launch with JCSAT-17 and GEO-KOMPSAT-2B is designated Flight VA252 in Arianespace’s numbering system, signifying the 252nd mission with an Ariane-series launcher. JCSAT-17 payloads incorporates S-band, C-band and Ku-band transponders, which will provide satellite communication services. The S-band and C-band transponders will serve NTT DOCOMO, Inc., the largest telecommunications company in Japan, for its flexible mobile communications services in Japan and the surrounding region under IRU contract (Indefeasible Right of Use). SKY Perfect JSAT will support NTT DOCOMO’s satellite communication services.

Built by Lockheed Martin Space, JCSAT-17 will be the 47th satellite made by this manufacturer to be launched by Arianespace.

GEO-KOMPSAT-2B will be KARI’s second satellite as a manufacturer, and its third as a client, to be launched by Arianespace.

The predecessor satellite, GEO-KOMPSAT-2A, was successfully launched by Arianespace in December 2018.

GEO-KOMPSAT-2B will be the eighth satellite launched by Arianespace for South Korea.