[SatNews] Named for children who were among the winners of a European Commission painting competition in 2011, Doresa and Milena are the first in a series of 22 satellites.

Soyuz Flight VS09 Galileo’s “Doresa” and “Milena” spacecraft have received their orbital “boost” with the installation of these satellites and their specially-designed dispenser system on Soyuz’ Fregat upper stage in preparation for Arianespace’s next flight from the Spaceport in French Guiana. 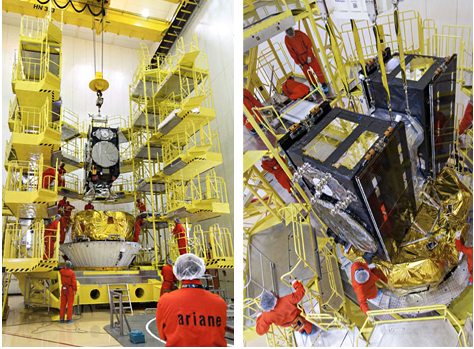 As the next step in payload preparations, Doresa and Milena, along with the dispenser and Fregat upper stage, will be encapsulated in the two-piece protective payload fairing to form the “upper composite,” which then is mated to Soyuz after the vehicle’s rollout from the MIK integration building where launcher assembly is handled.

Scheduled for liftoff at precisely 9:31:14 a.m. local time in French Guiana on August 21, Soyuz will carry out a nearly 3-hour, 48-minute mission from launch to the separation of Doresa and Milena on Flight VS09. Fregat, which is responsible for carrying out the final orbital maneuvers, will perform two burns separated by a three-hour-plus ballistic phase to reach the targeted deployment point for VS09’s dual-satellite payload.

Named for children who were among the winners of a European Commission painting competition in 2011, Doresa and Milena are the first in a series of 22 Galileo FOC satellites that will be deployed using Arianespace’s workhorse Soyuz and heavy-lift Ariane 5 vehicles. Soyuz also has previously lofted four total Galileo IOV (In-Orbit Validation) phase spacecraft on two missions from French Guiana, along with two GIOVE (Galileo In-Orbit Validation Element) satellites on separate flights operated by Arianespace’s Starsem affiliate from Baikonur Cosmodrome in Kazakhstan.

Galileo’s FOC phase is funded by the European Commission, which has designated the European Space Agency as the system’s development and sourcing agent. The prime contractor for these initial two Galileo FOC satellites, which have a mass of 730 kg. each, is OHB System of Germany, with the spacecraft’s navigation payloads supplied by Surrey Satellite Technology Ltd. of the UK.

To provide highly accurate positioning for most places on Earth, the complete Galileo constellation will comprise 27 operational satellites and
three reserves distributed along three circular medium Earth orbit planes at an operational altitude of 23,222 km., inclined 56 deg. to the equator.