A 40th Anniversary for Arianespace and a Successful 2019

Arianespace recorded a solid operational and business performance in 2019 by orbiting 24 satellites with nine launches, while signing 14 launch services contracts during the year for a total of 44 satellites ranging in mass from six kilograms to nearly six metric tons, marking the flexibility of the company’s commercial offerings. 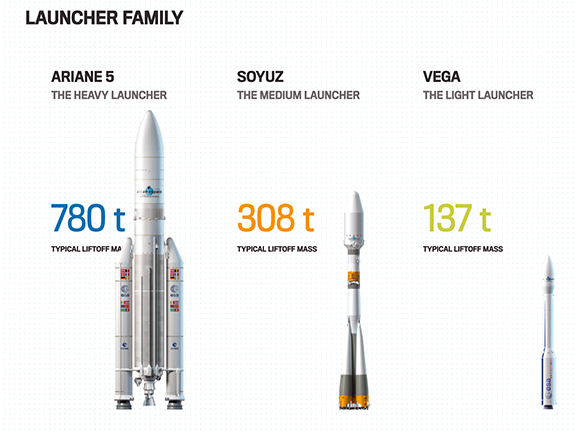 Arianespace lofted eight GEO satellites last year, versus the six orbited by competitors. Arianespace welcomed the mobilization of the European Space Agency (ESA) Member States at the Space19+ ministerial-level conference in Seville, Spain, and also announced the launch contract for the Euclid scientific mission, the 14th signed in 2019, which may be launched by Ariane 6.

With the flexibility of its product range, Arianespace is targeting new records in 2020 for the number of launches to be performed and the satellites to be orbited, as well as the inaugural missions with Vega C and Ariane 6.

Arianespace has now announced their results for 2019 and their goals for 2020.

Since 1980, Arianespace has launched a total of 616 satellites for more than 100 commercial and institutional customers from around the world, making a major contribution to humankind’s knowledge of space, the protection of Earth, and improving life on the planet.

54 launches in the backlog:

…for 35 customers from around the world, as follows (by number of launches):

2020: in addition to the inaugural flights of Vega C and Ariane 6, up to 20 launches could be carried out to deploy more than 300 satellites.

> As many as 12 launches by Ariane 5, Soyuz and Vega from the Guiana Space Center:

> Eight launches from the Baikonur and Vostochny cosmodromes for the OneWeb constellation’s deployment, and potentially more depending on satellite availability.

> Initial launches of Vega C and Ariane 6, under the responsibility of ESA.