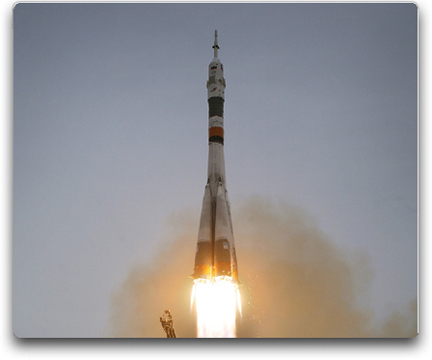 Less than 10 minutes after launch their spacecraft reached orbit. Its antennas and solar arrays were deployed shortly afterward. They are scheduled to dock with the station at 8:14 a.m. Saturday, March 28. Padalka will serve as commander of Expeditions 19 and 20 aboard the station. Barratt will serve as a flight engineer for those two missions, they will spend a six-month stay in space. Padalka and Barratt's other crewmate is Koichi Wakata of the Japan Aerospace Exploration Agency. He arrived to the station March 17 on space shuttle Discovery.

Simonyi, flying to the station under a commercial agreement with the Russian Federal Space Agency, previously visited the complex in April 2007. He is the first spaceflight participant to make a second flight to the station and will spend 10 days aboard. Simonyi will return to Earth April 7 with Expedition 18 Commander Michael Fincke and Flight Engineer Yury Lonchakov, who have been on the station since October 12, 2008.

The Expedition 19 crew will continue science investigations and prepare for the arrival of the rest of the station's first six-person contingent. Roman Romanenko of the Russian Federal Space Agency, Frank De Winne of the European Space Agency and Canadian Space Agency astronaut Bob Thirsk will launch from Baikonur on May 27, arriving at the station on May 29. After all the astronauts are aboard, Expedition 20 will begin, ushering in an era of six-person station crews. This mission also will be the first time the crew members represent all five International Space Station partners.