Arianespace Sets The Date For The Big Bang Mission (Launch)


[SatNews] This fifth and final European ATV – designated Georges Lemaître after the Belgian physicist and father of the Big Bang theory... 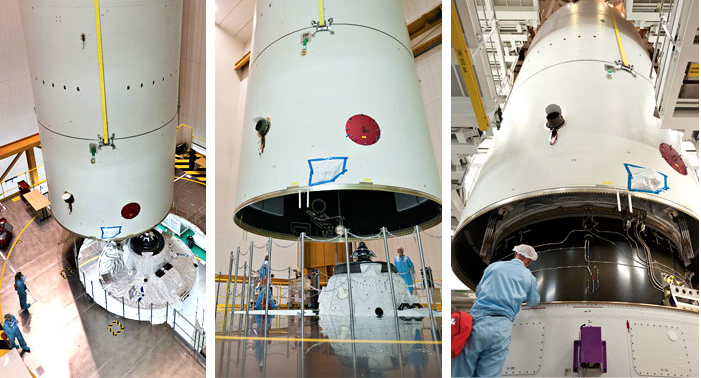 In the photo series above, Ariane 5’s large payload fairing is positioned and lowered into place over Europe’s latest Automated Transfer Vehicle – which is integrated on the launcher at the Spaceport in French Guiana.

With the completion of complementary verifications and control measures
associated with the Ariane 5 ES launcher, Arianespace has set the date for
its Flight VA219 mission for Tuesday, July 29.

Liftoff of the launch vehicle is now scheduled at:

This fifth and final European ATV – designated Georges Lemaître after the Belgian physicist and father of the Big Bang theory – is to resupply the International Space Station, as well as perform maneuvers to maintain the facility’s nominal orbit and test new rendezvous sensors in space. In addition to the fuel and air it will carry to the crewed space station, ATV Georges Lemaître will deliver more than 2,600 kg. of dry cargo.

Arianespace will loft ATV Georges Lemaître as part of its record manifest planned in 2014. This mission is designated Flight VA219 in the company’s numbering system, signifying what will be the 219th launch of an Ariane 5 family vehicle.

All ATVs have been orbited by Ariane 5 launchers, beginning with “Jules Verne” in March 2008, and followed by “Johannes Kepler” in February 2011, the “Edoardo Amaldi” in March 2012, and last June’s flight with “Albert Einstein.”