The Advanced TV infosite has posted a story that Elon Musk’s SpaceX project, Starlink, is planning to launch approximately 4,425 satellites in order to girdle the Earth and provide high-capacity broadband to every part of the planet.

Starlink’s overall aim is to populate is fleet with up to 10,000 satellites in order to cope with anticipated growth in demand. 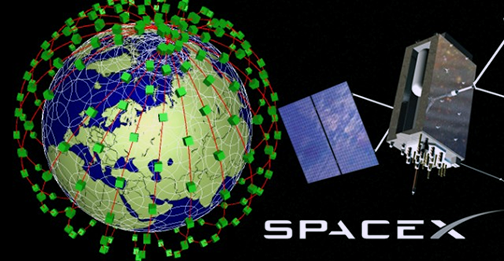 Reportedly, Elon Musk – on a visit to the Starlink facility in Redmond, Washington, back in June — fired “at least” seven senior members of the team.According to Reuters, he replaced the lost staffers with new team members and with a brief to get the first batch of satellites into orbit by mid-2019.

Starlink already has a pair of satellites placed into orbit in February of this year, the cheekily named Tintin 1 and Tintin 2. There are some 300 staff working at Redmond and Musk has previously said that the factory would have “maybe” 1,000 people within three to four years of operation.

SpaceX spokeswoman Eva Behrend told Reuters that Starlink is now incorporating lessons learnt and “reorganized to allow for the next design iteration to be flown in short order.”

Musk’s SpaceX is on record as saying that the company would launch their constellation in batches through to 2024 and that the mission is “pretty much on target.”