[SatNews] After several weeks of tectonic rumblings beneath the surface, one of the most active volcanoes in Indonesia began spewing ash plumes and lava into the skies over tropical Asia. 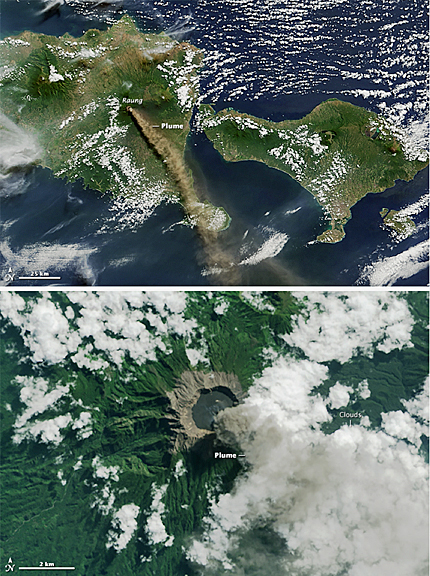 At least 900 airplane flights into and out of Bali and other regional airports were cancelled due to concerns about the ash clouds, which wafted as high as 6 kilometers (20,000 feet) into the air. Volcanic ash can cause extensive damage and failures in jet engines.

On July 12, 2015, the Moderate Resolution Imaging Spectroradiometer (MODIS) on NASA’s Aqua satellite captured a natural-color view (top) of a plume of ash and volcanic gases trailing away from Mount Raung on the Indonesian island of Java. The image has a resolution of roughly 250 meters per pixel.

One day earlier, the Operational Land Imager (OLI) on Landsat 8 got a closer view (about 25 meters per pixel) of Raung’s summit caldera amidst some afternoon cloud cover and a plume streaming east and southeast.

Mount Raung is a stratovolcano that has erupted at least 13 times in the past 25 years, according to records kept by the Smithsonian Global Volcanism program. The summit stands 3,332 meters (10,932 feet) above sea level and is capped by steep caldera that is 3 kilometers (2 miles) in diameter. All of the known volcanic eruptions at Raung have occurred within that caldera. Volcano observer Aris Yanto captured video of lava pulsing into the air from a new cone that appears to have formed in this eruption.

No evacuations were ordered for residents living near Raung, though authorities have urged people to wear face masks so as to not inhale ash.