[SatNews] Arianespace’s Soyuz mission to further expand the European Galileo satellite navigation constellation has been authorized for tomorrow’s launch from the Spaceport in French Guiana. 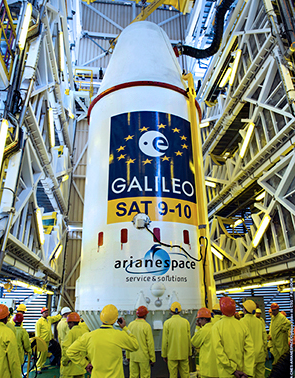 Soyuz has been cleared for Arianespace’s nighttime liftoff tomorrow evening with the latest two Galileo satellites, which are contained in the “upper composite” – shown here after integration atop the launcher in French Guiana.

Soyuz has been cleared for Arianespace’s nighttime liftoff tomorrow evening with the latest two Galileo satellites, which are contained in the “upper composite” – shown here after integration atop the launcher in French Guiana.

Approval for the nighttime liftoff was given at the conclusion of today’s Launch Readiness Review, which verified the “go” status of Soyuz, its two Galileo satellite passengers, the Spaceport’s infrastructure and the network of downrange tracking stations.

Payload lift performance for the September 10 mission—designated Flight VS12 in Arianespace’s launcher family numbering system—will be approximately 1,600 kg., which includes the two 715-kg.-class satellites and a dispenser system that will release the satellites at nearly 3 hrs., 48 min. after liftoff.

Tomorrow’s launch will be the 12th mission from French Guiana for Arianespace’s medium-lift workhorse, as well as the company’s eighth flight in 2015 with its three-vehicle launcher family – which is completed by the heavy-lift Ariane 5 and lightweight Vega.

Following liftoff at exactly 11:08:10 p.m. (local time in French Guiana) tomorrow, the powered phase of Soyuz’ lower three stages will last for a combined total of some nine minutes, followed by two burns with the Fregat upper stage.

After their deployment, the two satellites will operate at medium Earth circular orbit in Galileo’s Orbital Plane A – one of three orbital planes being populated by the navigation spacecraft.

The passengers for Flight VS12 are the fifth and sixth FOC (Full Operational Capability) spacecraft for Europe’s Galileo navigation program.  They were built by OHB System, with their navigation payloads supplied by Surrey Satellite Technology Ltd.

Galileo’s FOC phase – during which the network’s complete operational and ground infrastructure is being deployed – is managed and funded by the European Commission. The European Space Agency has been delegated as the design and procurement agent on the Commission’s behalf.

The Galileo system will provide high-quality positioning, navigation and timing services under civilian control, and is designed for interoperability with the U.S. GPS and Russian Glonass global positioning systems.