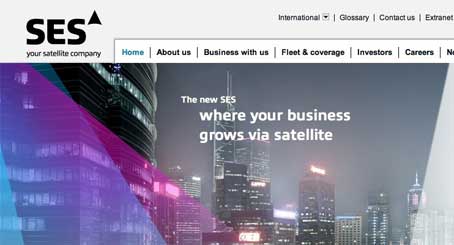 [SatNews] Never stop and never look back might very well be this Company's motto...

SES (Euronext Paris and Luxembourg Stock Exchange: SESG) announced today that it further increases the focus on emerging and growth markets and introduces four global sales regions with a dedicated management leading the strong SES teams in each region. The regions are: Americas, Europe, Africa, and Asia-Pacific/ India/ Middle East.

Elias Zaccack has worked for SES for more than 12 years and held different positions in sales and business development in Asia as well as in the U.S. He was previously Vice President Regional Business Development Asia Pacific. He will be based in Washington and will work closely with Steve Bunke and Dolores Martos who continue to lead the sales forces in North and Latin America respectively.

Ibrahima Guimba-Saidou is joining SES from Intelsat where he was Senior Key Account Director and had different sales and marketing as well as systems operations roles over more than 15 years. His roles included the responsibility for the Intelsat representation in Africa. In his new role, he will be based in Johannesburg.

Deepak Mathur has successfully developed the activities of SES in Asia and Africa over the past 10 years. He remains based in Singapore and will work closely with Glen Tindall who continues to be responsible for the Asia-Pacific region for SES.

“This organization and these nominations are another step on our way to consolidate our strong position in Europe and North America while focusing our attention on the emerging markets, where a lot of the future growth for SES is coming from”, says Romain Bausch, President and CEO of SES. “With our regional split and our new sales executives, we have a strong organisation in place to respond to the exciting challenges that lie ahead of us. We regret that Scott will not be part of our team going forward any more. We thank him for his enormous contribution to the development of SES throughout many years as a top sales executive and we wish him well for his future.”