[Satnews] NASA is preparing to launch a set of miniature satellites that push the boundaries of space-to-Earth communications for CubeSats, as well as testing the ability of two small spacecraft to fly in close proximity to each other.

Yes, space is big…but these satellites are ultra-small.

That first CubeSat, Martinez explains, carries a 6-watt laser to demonstrate high-speed optical transmission of data from Earth's orbit to the ground. The laser system is much more compact than anything previously flown in space.

“Laser communications is very important, not just for NASA but for other U.S. government agencies as well,” says Martinez. Optical data rates achieved by OCSD spacecraft are expected to be a speedy 200 megabits per second (Mb/s) or higher, he adds—100 times faster than current high-end CubeSat communications systems.

“This little mission is a huge achievement for STMD and for small satellites in general,” Martinez notes.

The initial OCSD mission, with the one satellite, is slated for launch on October 8 aboard an Atlas rocket from Vandenberg Air Force Base in California.

Once in orbit, the small satellite will evaluate the ability to precisely point itself as it demonstrates data transfer by laser. That laser is hard-mounted to the spacecraft and beam steering is accomplished through precision pointing of the spacecraft as a whole, says Richard Welle, director of the Microsatellite Systems Department at The Aerospace Corporation.

“Laser communications is very important as it enables the transmission of data from high value science experiments, imaging and other sensors,” Welle observes. Also, watching how well the attitude control system on the satellite operates is also critical,” he points out.

“There’s no auxiliary steering system. You just point the whole spacecraft at the target on the ground,” Welle says.

Bursts of laser data from the satellite will be received high atop Mt. Wilson in California, north of Pasadena, at The Aerospace Corporation’s Mt. Wilson Optical Communications and Atmospheric Measurements (MOCAM) station. It houses a 12-inch (30-centimeter) diameter Cassegrain telescope outfitted with a photodiode detector.

“It looks nothing like a traditional satellite communications system. It makes use of an optical telescope rather than your typical radio frequency dish antenna,” Welle points out. 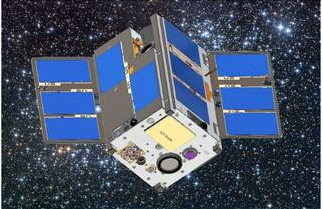 Optical downlink sessions between the small spacecraft flying overhead and the ground station are expected to last no more than three minutes.

The second OCSD mission—using two satellites—is slated for launch early in 2016. Lessons learned from the earlier flight are to be rolled into the second mission. But along with laser communications testing, the dual CubeSats are also to perform proximity operations.

“The whole concept of being able to fly small satellites in close proximity and in a controlled fashion is a big deal too,” said NASA’s Martinez. Using special sensors and camera gear built for this mission permits relative position measurement between the two small satellites, which is a capability not previously demonstrated.

The capacity to maneuver CubeSats relative to each other makes possible a diversity of tasks. In-space observation of other satellites becomes feasible. That ability also opens the door to servicing or connecting small spacecraft together to form larger systems or networks in space.

There's little doubt that the OCSD project is a harbinger of things to come.

“But we need to learn how to crawl before we walk,” Martinez emphasizes, and OCSD provides just that type of progress.

Without the support of NASA and STMD, Welle says, there would have been a significant delay in terms of getting this satellite technology into orbit.

“I think the key value of small satellites is the way it encourages very rapid turnover of technology,” Welle adds. “It’s kind of like the electronics revolution where you achieve next generation technology in a few months, instead of years.”