[SatNews] “Space garbage hitting and disabling a military satellite may be seen as an attack, which could provoke retaliation with all of the ensuing consequences.”

The great frontier of space is increasingly cluttered with debris, and a Russian engineer warns that damage to a satellite from some hypothetical collision may be misconstrued as a deliberate act of sabotage. 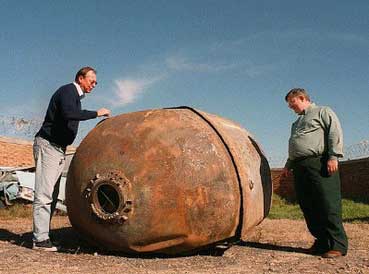 Researchers examine piece of space junk that came down in Cape Town on April 27, 2000 (AFP Photo)

With the global village increasingly dependent on satellites and other space-based equipment, Academician Yury Zaitsev of the Russian Academy of Engineering Sciences believes that accidental damage to an American or Russian satellite by runaway space garbage may be seen as a deliberate attack from a foreign entity, which may be the spark to ignite a conflict.

"The American, Russian and other defense agencies have already been suffering serious losses, caused by the collision of satellites with space garbage,” Zaitsev said. “Space garbage hitting and disabling a military satellite may be seen as an attack, which could provoke retaliation with all of the ensuing consequences.”

As more nations send their own satellites into outer space, the risk of space collisions has increased dramatically over the last decade.

US space engineers seem to agree with their Russian counterparts concerning the risk of potential space collisions involving debris. Last year, the US-based National Research Council reported that the amount of space debris “has reached a tipping point, with enough currently in orbit to collide continually and create even more debris, raising the risk of spacecraft failures.”

However, the issues raised by Zaitsev over the possibility of a conflict arising as the result of some “accidental” space collision deserve consideration. As a means for reducing such risks, Zaitsev has proposed various suggestions, including burning or dumping the fuel leftover in booster rockets and in payload modules. On March 11, 2000, a Chinese carrier rocket exploded in orbit and created a huge debris cloud.

The Russian engineer also suggests de-orbiting defunct satellites or transfer them to a circling space junkyard, which Zaitsev says would exist in a harmless “disposal orbit.”

Finally, Zaitsev believes it is necessary to “ban the deliberate destruction of spacecraft, which is frequently done when the service life of a military satellite expires, and to prohibit tests of kinetic weapons."

In conclusion, some space-junk trivia: In January 1997, Lottie Williams was taking a late-night walk with friends in Oklahoma when the group saw a streak of light in the sky. Williams then felt something graze her shoulder. It turned out to be part of a US Delta II rocket launched in 1996 – the only space junk known to have hit someone.

Williams was uninjured in the incident – and very lucky.

By Robert Bridge, of RT.