ULA's Atlas Rocket Shone Brightly in the Night with the Launch of AEHF-4 for U.S.A.F. 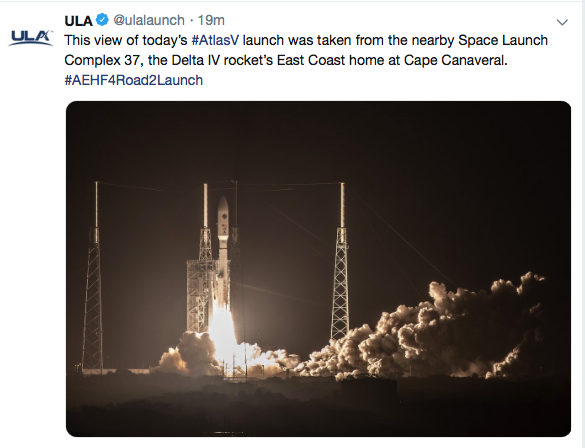 Lockheed Martin Protected Communications vice-president Mike Cacheiro said that this fourth satellite will complete a worldwide ring of AEHF satellites to deliver global extended data rate (XDR) coverage for the USAF and for the partner nations, Canada, the Netherlands and the UK, that also connect to the AEHF network.

He added that real-time video, battlefield maps and targeting data will be provided by the satellite to help support military communications. And that the Silicon Valley-based team that built this satellite can’t wait to see it lift off. And in the meantime, they’re making great progress on producing the fifth and sixth satellites in the constellation.

Built by Lockheed Martin, the communications AEHF-4 satellite was manufactured at the company’s facility in Sunnyvale, California, U.S., and delivered to Florida on July 27. 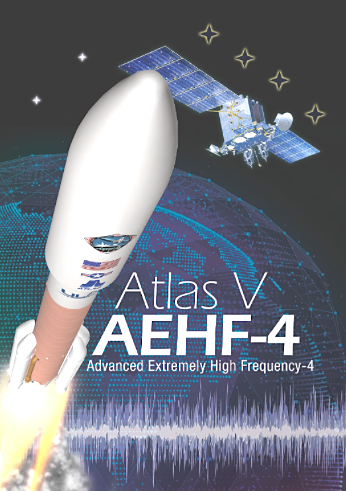 The constellation of four satellites can deliver communications capabilities that are jam-proof and provide low probability of detection or interception.

The system has been designed to deliver improved global and highly secure protected communications for strategic command and tactical troops operating on the ground, at sea, and on air platforms.

Real-time video, battlefield maps and targeting data will be provided by the satellite to help support military communications.

Lockheed noted that a single AEHF satellite is capable of providing total capacity that is greater than the constellation of the five-satellite Milstar system.

While the MILSATCOM Systems Directorate at the USAF Space and Missile Systems Center is leading the AEHF project, Lockheed Martin serves as the primary contractor and Northrop Grumman as the payload manufacturer.

Much of this information was derived from Air Force Technology

The U.S. Air Force Space Command is responsible for operating the system. This will be 131st mission for United Launch Alliance and the 50th launch for the Air Force. It is the 79th for an Atlas V rocket and the 9th in the 551 configuration.