Finally an Agreement in Guyana With Governments and Collective ... Arianespace to Proceed 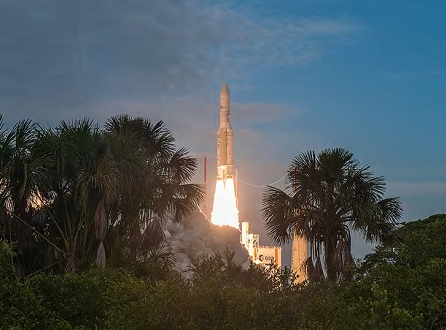 According to Le Monde... The social movement that paralyzed Guyana for more than a month ended on Friday 21 April with the signing of an agreement to end the conflict between the government,  local elected officials and the collective Pou Lagwiyann dékolé ("So that Guyana takes off") which led the mobilization.

The roadblocks installed on the ultramarine territory were lifted, with the exception of the one blocking the Ariane rocket at Kourou, still effective in the evening. The roundabout at the entrance of the space center was thus blocked by activists claiming "a letter from the Minister of Health" to write in writing "the passage into the public sector of the Medical and Surgical Center" of the city.

The text includes an immediate € 1.1 billion contingency plan presented at the beginning of the month. This includes measures for safety, education, health, and business support. The agreement "acts" also the demand for additional measures of the collective and elected representatives to the tune of 2.1 billion euros.

In Cayenne, the spokesman of the collective, Davy Rimane, welcomed the agreement: "We managed to make the protocol appear in the Official Journal. Now we can work with this document and go to court if we are not satisfied." In a statement, Overseas Minister Ericka Bareigts welcomed the text, referring to "a defining day for the future of Guyana."  For the prefect of the territory, Martin Jaeger, it is a "fundamental act. He traces ambitions. It is up to us to live itseriously, consciously." 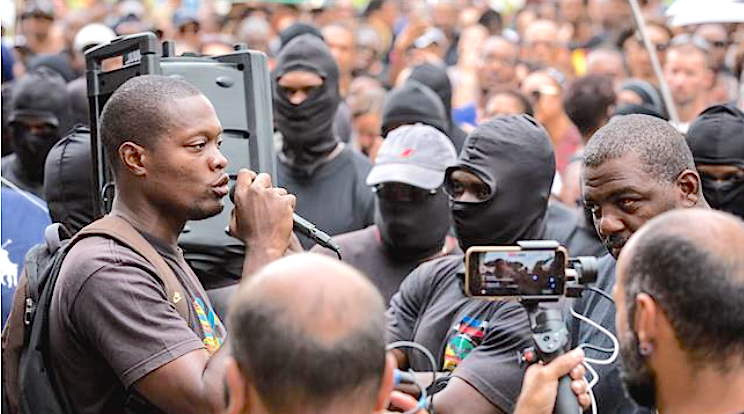 Spokesperson of the 500 brothers collective (500 frères) Mikael Mancee speaks to protesters in front of the Prefecture on April 7, 2017, in Cayenne, French Guiana, as they call for the prefect to meet with a delegation from the collective. (Photo by AFP)

Some members of Pou Lagwiyann dékolé have however made themselves threatening: "Once the next government will be in place, from the first day, we will take action. The State owes us seven billion and not two," said Olivier Goudet, a member of the "500 brothers against delinquency" movement, whose peculiarity is to parade hoods.

Compared with the first agreements reached in Cayenne by the government on 1 April, this text presents little change, except for the green light to build a "judicial city" in the city and the acceptance that the question of The "total surrender" of land is discussed "during the next General Assembly of Guyana". It also states that the State "shall be the subject of a referral by the congress oflocal elected representatives to a "statutory development" of the territory. On land, Paris also pledged "to give up 250,000 hectares free to the Guyanese territorial community and the communes of Guyana", and 400,000 hectares to the Amerindians and Bushinengués.

Pou Lagwiyann dékolé also obtained the guarantee that there would be no prosecution against "the signatories of the agreement". After a march that had gathered thousands of Guyanese on March 28, tensions had intensified for several days among the population, divided on whether to continue the roadblocks that have penalized the economy, pinned the rocket Ariane on the ground and Product shortages.

The collective of the indigenous people of Guyana, which has been mobilized from the beginning, has disassociated itself from the movement, as have the socio-professionals, who on Friday denounced the "lack of representativeness and legitimacy of the signatory" of the agreement reached in the socio- The Union of Guyanese Workers (UTG).

Note: The article is from LaMonde and the photos are from other sources that are identified.