Additional support is provided Radiance Technologies and the University of Alabama in Huntsville, or UAH, System Management and Production Center. 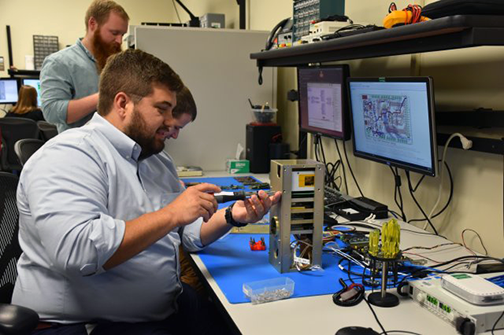 ACES RED is an SMDC technology demonstration for small satellites in support of Army and command technical objectives with support from Radiance Technologies and the University of Alabama in Huntsville, or UAH, System Management and Production Center.

Photo by Jason B. Cutshaw

ACES RED was developed in the USASMDC/ARSTRAT Technical Center's Concepts Analysis Laboratory, or CAL. The CAL brings together high school and college students, under the supervision and mentorship of SMDC Tech Center government employees, to perform hands-on tasks for government projects and SMDC research.

"ACES RED is built to increase the technology readiness level of different components for flight-based missions for other programs within the command," said Mason Nixon, ACES RED principle investigator. "We are taking different technologies and trying to advance them while reducing risks so other programs don't have to. We also want to train the incoming workforce and build up technical competencies in those core areas that support our missions."

This experiment looks to quickly mature various commercially available off-the-shelf technologies that will reduce the cost and complexity as well as maintain the performance of future Army small satellites.

"We are also using ACES RED as a pilot program to build up test capabilities for space hardware," Nixon said. "We are hoping to gain future capabilities such as more refined attitude determination and control for satellites to help orient them when in space, as well as taking industrial-grade computers and testing them in a space environment. Where you might see possibly tens of thousands of dollars for a piece of existing hardware, we are looking at hundreds of dollars.

One engineer added that this will mean SMDC can create something in-house with most of the parts that are going into space being designed and assembled here on Redstone Arsenal by in-house engineers.

Gauge Day, ACES RED chief engineer. said that in the future the turnaround time, lead time and the creation of another iteration of ACES RED is going be quicker, faster and space hardware will get up there a lot faster — all the capabilities were designed here so none of the design will have to be outsourced.

Day said initially his main role on ACES RED was working with the mechanical team and they had to figure out what direction the team was going to take with the design. He then took on the role of lead structural designer.

Day added this his main focus is to design a modular system for space so different hardware can have plug and play, and any time a change is needed, or something fails, that module can be swapped out and replaced. There is no stack feature so it is different from what most space systems have seen before with cubesats. Vibrations and environmental testing have, so far, been successful

Day explained how the ACES RED modular system design is more convenient than a stackable system because replacing parts in stackable system is more difficult, noting that with a stackable system, if the fourth board breaks, then you have to take the three on top of it off to get to the fourth one. ACES RED actually had this problem during an environmental test where a board needed replacing and the board was slid out and replaced with a new one that worked just fine.

ACES RED is scheduled to be launched on a Falcon 9 rocket and attached to the outside of the International Space Station through the Department of Defense Space Test Program.

Elizabeth Neilson, ACES RED lead systems engineer and integration specialist, said, "Right now our payload is down at Johnson Space Center in Texas and it is being integrated into a full launch payload pallet with other experiments on it. That pallet will then go through its own iteration of environmental testing and once it is finished we will be able to fix any issues that may come up during that time.

"We have definitely had a lot of lessons learned with ACES RED," she added. "Our team was almost entirely composed of young engineers or college students and recent college graduates. There was a big learning curve and this was one of the first projects for a lot of people where people are actually designing space hardware that is going to be launched. There were a lot of things that tripped us up that we didn't know going into it."

Neilson said the support team at SMDC, leaders, and the research and technology team are always there to help them whenever they discover a problem. She described how the CAL trains and mentors college students and young professionals via the Department of Defense's Science, Mathematics And Research for Transformation, or SMART, scholarship, which pays students full scholarship, stipend, insurance, and more to encourage science and technology studies.

Neilson also added that students at UAH can also work in the CAL via the Students working at the Army in parallel, or SWAP, where they are hired through a contract with UAH.

Neilson added that everybody on this team brought their own unique flair to it,. The more experienced engineers know how things are supposed to work ,whereas it is nice to have younger engineers who get tripped up with issues and they have to think through the process. Then you have younger engineers who are asking questions and trying to learn along the way. There are people coming in who have only designed theoretical projects for their classes and, by the end of ACES RED, they are making something that is going into space — they are making all the mistakes that can be made and have learned lessons for future reference and they will wind up being really good engineers for the next project.

The DOD Space Test Program is administered by the Space Development Group based at Kirtland AFB, N.M. The Space Test Program is chartered by the Office of the Secretary of Defense to serve as "...the primary provider of mission design, spacecraft acquisition, integration, launch, and on-orbit operations for DOD's most innovative space experiments, technologies and demonstrations" and "...the single manager of all DOD payloads on the Space Shuttle and International Space Station."

The Space Test Program has been providing access to space for the DOD space research and development community since 1965. The technologies behind most military satellite programs flying today, such as the Global Positioning System, military communications satellites and space-based surveillance and weather systems, had their initial demonstrations as Space Test Program risk reduction experiments.