[SatNews] "We received nearly 500,000 satellite observations and screened over 1,000 active satellites on a daily basis..."

Committed to promoting safety and transparency in the space domain, U.S. Strategic Command maintains a registry of tens of thousands of man-made objects in space and shares the information freely with anyone who seeks it through a command-run website. 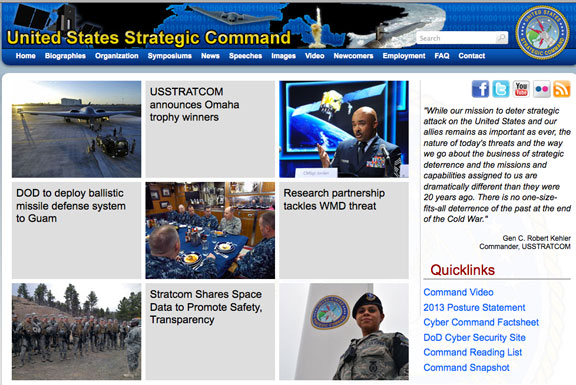 Air Force Space Command, recognizing that collisions could damage orbiting satellites and cause more space junk, started the database as a pilot program before turning the project over to Stratcom in 2010, Air Force Col. Lina Cashin, Stratcom's division chief for space, cyber and deterrence policy and security cooperation, said during an interview here with American Forces Press Service.

The project, which involves regular tracking of old rocket bodies, debris and about 1,000 active satellites, has become one of Stratcom's most universally popular products, Cashin said. Space-Track.org has 85,000 account holders in 185 countries, she noted.

In addition to providing basic satellite catalog data to all account holders, Stratcom provides more advanced data services on request. The command also has agreements in place with 35 commercial companies to expedite information-sharing, and hopes to enter similar agreements with space-faring nations to better support their space operations, Cashin said.

Space situational awareness is crucial to Stratcom's efforts to understand what is going on in space and to cope with the increasing amount of space debris, she explained. Both the National Space Policy and the National Security Space Strategy call on the United States to be a leader in sharing satellite positional information to the greatest extent possible, Cashin said.

"We think that providing more transparency on the data that we have to satellite owners and operators -- whether they are commercial, intergovernmental or foreign entities -- promotes a more stable environment in space," Cashin said. "We want to share information with the rest of the world that we think can help them, and in turn help us be more responsible space operators."

The registry serves a two-fold mission for those with satellites in orbit or planning to launch them, she explained. Nations and commercial companies can tap basic satellite data to plan space launches that won't collide with objects already in space. And in the event that one of their satellites comes dangerously close to another object, Stratcom provides emergency notification so they can adjust course, if necessary.

"We received nearly 500,000 satellite observations and screened over 1,000 active satellites on a daily basis," he told the Senate and House armed services committees. Based on those screenings, he said, the command issued more than 10,000 warnings of potential collisions, supported 75 "avoidance maneuvers" to prevent them and filled more than 300 requests for orbital data from 85 entities.

"Those numbers will go [up] every year," Kehler told Congress. He emphasized the need for improvements to Stratcom's space situational awareness capabilities and established "rules of the road" that govern behavior in space and allow the command to detect problems as they occur.

Space has changed dramatically since the Russians launched Sputnik in 1957, Cashin said. Sixty nations are now considered "space-faring," with others anxious to join them to take advantage of the communication, navigation and other capabilities satellites and other space-based assets provide.

That makes space situational awareness more important than ever before in what Cashin characterized as an increasingly congested, competitive and contested domain.

In addition to the tens of thousands of fist-size manmade objects Stratcom regularly monitors, those too small to be tracked with current sensors could reach into the hundreds of thousands, she said.

The collision of an Iridium Communication Inc. satellite and a Russian Kosmos satellite in 2009 generated some 2,200 pieces of trackable debris. China's anti-satellite test in 2007 generated more than 4,500 pieces—more than 3,000 of them still in orbit, and many to remain so for hundreds of years, Cashin said.

Meanwhile, space is increasingly competitive as more countries, civilian agencies and commercial companies jockey for an advantage within increasingly limited real estate. Particularly coveted is the area of geosynchronous orbit at an altitude of about 22,000 miles directly over the equator, explained Air Force Brig. Gen. David Thompson, Stratcom's deputy director for global operations. This orbit provides the best location for communications satellites, all requiring separation from other satellites to prevent interference.

That's made space more contested as users want to take advantage of what it offers—and sometimes deny others' access in the process.

Kehler told Congress he's made a priority of ensuring that space capabilities that have become integral to the American way of warfare are available "whenever and wherever they are needed."

The general also emphasized the importance of promoting trust and collaboration in space, a global common shared by nations and nongovernmental space operators around the globe.

Cashin reiterated the importance of promoting trust and collaboration in space. "We are shifting to be completely transparent and share with our allies and partners so we can promote a ... safe and stable space environment that benefits us all," Cashin said. "As space becomes increasingly congested, competitive and contested, collaboration with our allies is more important now than ever before."