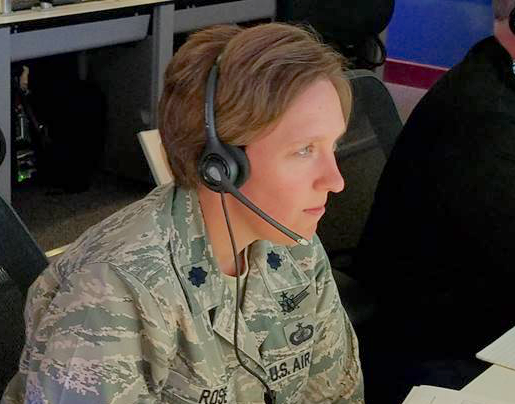 Lt. Col. Ryan Rose, chief of the Small Launch and Targets Division at Kirtland Air Force Base, New Mexico, sits on console during a countdown dress rehearsal ahead of the scheduled July 2 flight test of the launch abort system for the Orion multi-purpose crew vehicle. As a member of the Ascent Abort-2 mission’s senior management team, Rose is the senior Space and Missile Systems Center representative in the Mission Director’s Room, located in the historic Hangar AE at Cape Canaveral Air Force Station, Florida. (Photo: NASA).

Dress rehearsals are always a good idea, but even more so when the objective is to ensure a safe and historic launch of a rocket with engines that contain explosive materials that, when under proper control, can send a huge rocket soaring on a first ever mission.

The following announcement came from the Space and Missile Systems Center:

As a member of the AA-2 mission’s senior management team with NASA and contractors, Rose will be the senior Space and Missile Systems Center representative during the in-flight test of the launch abort system for the Orion multi-purpose crew vehicle. The three-minute mission of the Orion MPCV test article and its safety system will be conducted from the historic control center.

Adjacent to NASA’s John F. Kennedy Space Center, the Hangar AE Control Center has long been used by SMC, NASA and other customers as a communications center, to receive and monitor telemetry data from launch vehicles and spacecraft, both on the ground and during flight.

The Mission Director’s Center, or MDC, is the premier control room within Hangar AE. The MDC is designed for Lt. Col. Rose and other senior launch professionals, to support launch vehicle ground testing and liftoff operations.

“This place is definitely getting a workout as part of SMC’s ‘Summer of Launch ‘19’ campaign,” said Robert Douglass, chief of the Launch Operations Branch within SMC’s Small Launch and Targets Division. “It’s being used for the integrated countdown exercises, or ‘ICE’ led by SMC teams handling the fifth Advanced Extremely High Frequency (AEHF-5) mission as well as our efforts to support NASA’s Ascent Abort-2 flight test.”

Built in 1959, Hangar AE first supported the Air Force’s Thor missile program, which has a strong California connection. Forerunners of today’s modern SMC conceived, developed and managed Thor under the guidance of General Bernard Schriever, father and architect of SMC and military space. The intermediate range ballistic missile was built by the Douglas Aircraft Company in Santa Monica and Rocketdyne of Canoga Park and Simi Valley, and was tested on instrumented stands in Rancho Cordova, outside Sacramento, and the Phillips Laboratory at Edwards Air Force Base. 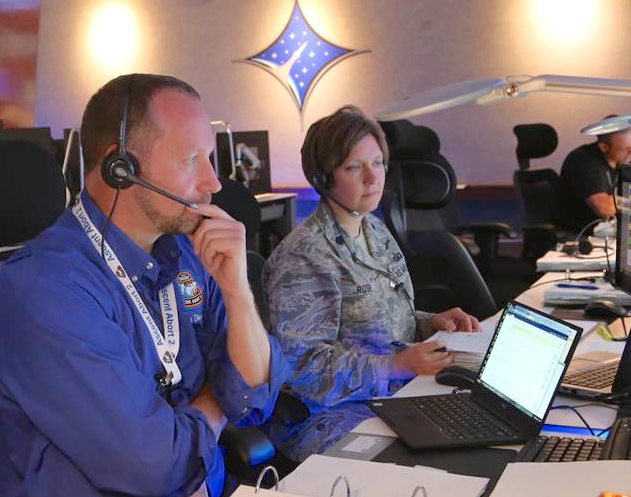 Over the next five decades, the Thor IRBM would evolve into the venerable Delta and Delta II space launch vehicle. A legendary workhorse of the American space program until its final flight from Vandenberg Air Force Base in September 2018, the Delta variants launched rovers to Mars, sent robotic probes to the moon, comets and the asteroids, put astronomical observatories into orbit and deployed the Iridium global communications network as well as the first GPS satellites.

Originally known as Missile Assembly Building AE for the Thor IRBM, and later as the Spacecraft Assembly and Checkout Building, Hangar AE was acquired from the Air Force in 1960 by NASA and modified for unmanned missions. It contains a Class 10,000 horizontal laminar flow clean room complex, a telemetry ground station, an extensive communications center for data, voice and video, three launch vehicle data centers, the Mission Director’s Center, and offices for payload and contractor personnel. Although located on Cape Canaveral Air Force Station, Hangar AE is maintained by NASA’s Kennedy Space Center.

The MDC underwent a major upgrade in 2017 to provide 34-inch ultrahigh-definition monitors, allowing senior managers to see video, voice and data all on one screen. With the modular design of the systems, the MDC can support missions at both Cape Canaveral AFS on the East Coast and Vandenberg AFB on the West Coast.

Robert DeWitt, Jr., who is running the launch checklist as the Air Force’s Abort Test Booster mission manager for AA-2, offered another perspective on how the MDC has changed over time.

“Over 50 years ago, a mission manager sat on this console using analog systems and vacuum tubes,” said DeWitt. “Today, I will be using a digital computer system to manage launch data. I wonder what the next generation will be using when they are on console in the MDC.”

Hangar AE allows independent verification and validation of vehicle and spacecraft telemetry for unmanned launch operations and provides real-time voice, data and video information for expendable vehicle checkout and launch operations. It provides connectivity to all launch pads at the Kennedy Space Center and Cape Canaveral AFS. Hangar AE can also obtain data from other launch sites beyond those at KSC and CCAFS. Launch sites for missions the facility has gathered telemetry on include Vandenberg AFB in California, the Reagan Test Site on Kwajalein Atoll in the Marshall Islands, NASA’s Wallops Flight Facility in Virginia and the Kodiak Launch Complex in Alaska.

Hangar AE is eligible for listing on the National Register of Historic Places under Criterion A in the area of Space Exploration as the Air Force and NASA’s original Mission Control Center for its program of unmanned launch missions and under Criterion C as a contributing resource in the Cape Canaveral AFS Industrial Area Historic District.