MicroDragon, a made-in-Vietnam Earth observation satellite, was launched into space at 9:50 am in Japan on January 18 (local time).

The Japan Aerospace Exploration Agency (JAXA) carried out the launch of MicroDragon along with six Japanese satellites using an Epsilon-4 rocket from the Uchinoura Space Centre in Kagoshima Prefecture, some 1,000 km away from Tokyo. 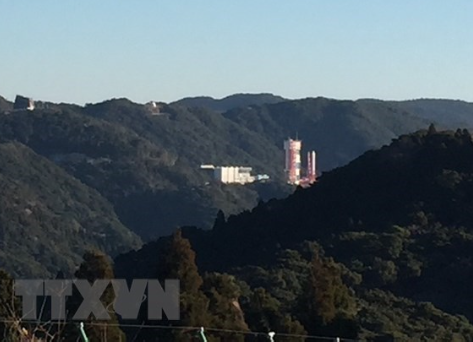 The Epsilon-4 rocket of the Uchinoura Space Centre in Kagoshima prefecture, which carried MicroDragon into space, before the launch (Photo: VNA)

The Vietnamese satellite was previously scheduled to enter space on January 17 but had to wait a day later due to unfavourable weather.

MicroDragon will be separated from the rocket after about an hour and send back first signals in one or two days. The satellite’s operation is expected to become stable after one to three months in space.

The satellite was developed by 36 Vietnamese engineers from the Vietnam National Space Centre (VNSC), who were sent to study space technology in Japan’s top five universities, namely the University of Tokyo, Keio University, Hokkaido University, Tohoku University and Kyushu Institute of Technology. The group began manufacturing the satellite in 2013 and successfully completed and tested it in 2017.

MicroDragon, measuring 50x50x50 cm and weighing 50 kilograms, is designed to monitor the quality of water in coastal areas, locate fishery resources, and observe changes in the ocean to assist the nation’s aquaculture. Also, it will help exchange data with the Microsatellite community in the world to enhance capacity in response to climate change and natural disasters.

Previously, VNSC engineers successfully made a satellite named PicoDragon (10x10x11.35 cm, 1 kg), which was launched into orbit in 2013.

As scheduled, after MicroDragon, Vietnam will make LOTUSat-1 and LOTUSat-2 satellites with advanced radar technology, each weighing 600kg and measuring 1.5×1.5×3 m with a 5-year lifetime in orbit.