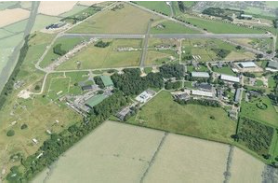 When you need to test a rocket—fire the test cells and such—you need to have a facility that can handle it, and so the UK Space Agency is making arrangements for such by investing £4.12m in a National Propulsion Test Facility. The planned facility will be based at Westcott in Buckinghamshire, with its history of rocketry research for defense and space development, building on existing facilities.

This will give the UK a new facility for space technology testing, enabling UK companies and academia to test and develop space propulsion engines. The UK Space Agency investment will add new capabilities for the UK space sector. Government funding will:

One of the industry stakeholders in the project, offering their facilities as part of the National Propulsion Test Facility, is Moog-UK. Moog-UK’s LEROS 1b engine recently placed the NASA Juno spacecraft into orbit around Jupiter following a five-year journey to the gas giant.

Katherine Courtney, Interim CEO of the UK Space Agency said, “Our investment in a National Space Propulsion Facility will add several new capabilities to the UK space sector and build upon what is already a world-class UK space propulsion sector.

The new capability will allow cost-effective development and testing of even more engines for interplanetary travel, as well as for th commercial telecommunications satellite market. Other UK users of the facility, via the Airborne Engineering test chamber, are expected to include Reaction Engines Limited, who are currently testing advanced rocket nozzle technology for the SABRE engine.

With the facility investment from the UK Space Agency, who will also chair the Steering Board for this national facility, and with STFC’s RAL Space team bringing experience of test facility management to the project, this is an example of UK cross-government, industry and ESA collaboration which will benefit the immediate stakeholders involved in the project, as well as the wider propulsion community by opening access to the facility.