[SatNews] The two light oscillations were like two dust motes in the grooves of a vinyl record on a turntable, if the oscillations were musical beats they would produce a specific syncopated rhythm...a Latin bossa nova or a tune from The Beatles’ White Album. 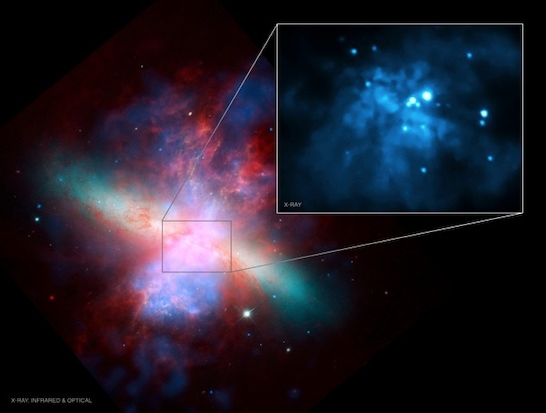 This image of the galaxy Messier 82 is a composite of data from the Chandra X-Ray Observatory, the Hubble Space Telescope and the Spitzer Space Telescope. The intermediate-mass black hole M82 X-1 is the brightest object in the inset, at approximately 2 o’clock near the galaxy’s center. Credit: NASA/H. Feng et al.

Astronomers have accurately measured, and thus confirmed the existence of, a rare intermediate-mass black hole about 400 times the mass of our sun in a galaxy 12 million light years from the Milky Way. The finding, published August 17 in Nature, uses a technique never applied in this way before, and opens the door to new studies of these mysterious objects.

The universe has so many black holes that it’s impossible to count them all. There may be 100 million of these intriguing astral objects in our galaxy alone. Nearly all black holes fall into one of two classes: big, and colossal. Astronomers know that black holes ranging from about 10 times to 100 times the mass of our sun are the remnants of dying stars, and that supermassive black holes, more than a million times the mass of the sun, inhabit the centers of most galaxies.

But scattered across the universe like oasis in a desert are a few apparent black holes of a more mysterious type. Ranging from a hundred times to a few hundred thousand times the sun’s mass, these intermediate-mass black holes are so hard to measure that even their existence is sometimes disputed. Little is known about how they form. And some astronomers question whether they behave like other black holes.

Now a team of astronomers has succeeded in accurately measuring, and thus confirming the existence of, a black hole about 400 times the mass of our sun in a galaxy 12 million light years from Earth. The finding, by University of Maryland astronomy graduate student Dheeraj Pasham and two colleagues, was published online August 17 in the journal Nature.

Co-author Richard Mushotzky, a UMD astronomy professor, says the black hole in question is a just-right-sized version of this class of astral objects.

“Objects in this range are the least expected of all black holes,” says Mushotzky. “Astronomers have been asking, do these objects exist or do they not exist? What are their properties? Until now we have not had the data to answer these questions.” While the intermediate-mass black hole that the team studied is not the first one measured, it is the first one so precisely measured, Mushotzky says, “establishing it as a compelling example of this class of black holes.”

A black hole is a region in space containing a mass so dense that not even light can escape its gravity. Black holes are invisible, but astronomers can find them by tracking their gravitational pull on other objects. Matter being pulled into a black hole gathers around it like storm debris circling a tornado’s center. As this cosmic stuff rubs together it produces friction and light, making black holes among the universe’s brightest objects.

Since the 1970s astronomers have observed a few hundred objects that they thought were intermediate-mass black holes. But they couldn’t measure their mass, so they couldn’t be certain. “For reasons that are very hard to understand, these objects have resisted standard measurement techniques,” says Mushotzky.

Pasham, who will receive his Ph.D. in astronomy at UMD August 22, focused on one object in Messier 82, a galaxy in the constellation Ursa Major. Messier 82 is our closest “starburst galaxy,” where young stars are forming. Beginning in 1999 a NASA satellite telescope, the Chandra X-ray Observatory, detected X-rays in Messier 82 from a bright object prosaically dubbed M82 X-1. Astronomers, including Mushotzky and co-author Tod Strohmayer of NASA’s Goddard Space Flight Center, suspected for about a decade that the object was an intermediate-mass black hole, but estimates of its mass were not definitive enough to confirm that. 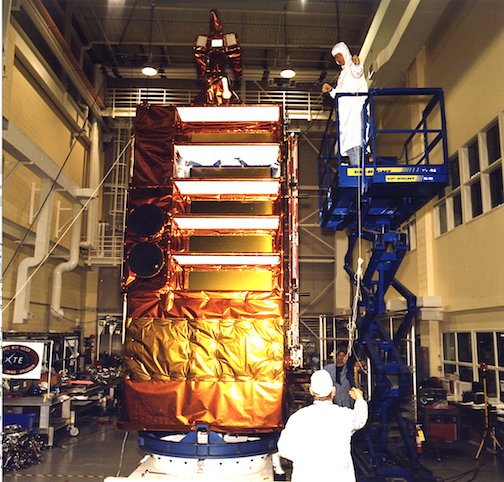 Between 2004 and 2010 NASA’s Rossi X-Ray Timing Explorer (RXTE) satellite telescope observed M82 X-1 about 800 times, recording individual x-ray particles emitted by the object. Pasham mapped the intensity and wavelength of x-rays in each sequence, then stitched the sequences together and analyzed the result.

Among the material circling the suspected black hole, he spotted two repeating flares of light. The flares showed a rhythmic pattern of light pulses, one occurring 5.1 times per second and the other 3.3 times per second, or a ratio of 3:2.

The two light oscillations were like two dust motes stuck in the grooves of a vinyl record spinning on a turntable, says Mushotzky. If the oscillations were musical beats, they would produce a specific syncopated rhythm. Think of a Latin-inflected bossa nova, or a tune from The Beatles’ White Album:

“Mean Mister Mustard sleeps in the park, shaves in the dark, try’na save paper.”

In music, this is a 3:2 beat. Astronomers can use a 3:2 oscillation of light to measure a black hole’s mass. The technique has been used on smaller black holes, but it has never before been applied to intermediate-mass black holes.

Pasham used the oscillations to estimate that M82 X-1 is 428 times the mass of the sun, give or take 105 solar masses. He does not propose an explanation for how this class of black holes formed. “We needed to confirm their existence observationally first,” he says. “Now the theorists can get to work.”

Though the Rossi telescope is no longer operational, NASA plans to launch a new X-ray telescope, the Neutron Star Interior Composition Explorer (NICER), in about two years. Pasham, who will begin a pot-doctoral research position at NASA Goddard in late August, has identified six potential intermediate-mass black holes that NICER might explore.