ESA — A Symmetrical Saturn Is A Hubble Happening

Researchers using the NASA/ESA Hubble Space Telescope recently took advantage of a rare opportunity to record Saturn when its rings are edge-on, resulting in a unique movie featuring both of the giant planet's poles. Saturn is only in this position every 15 years and this favorable orientation has allowed a sustained study of Saturn's almost symmetric northern and southern lights. 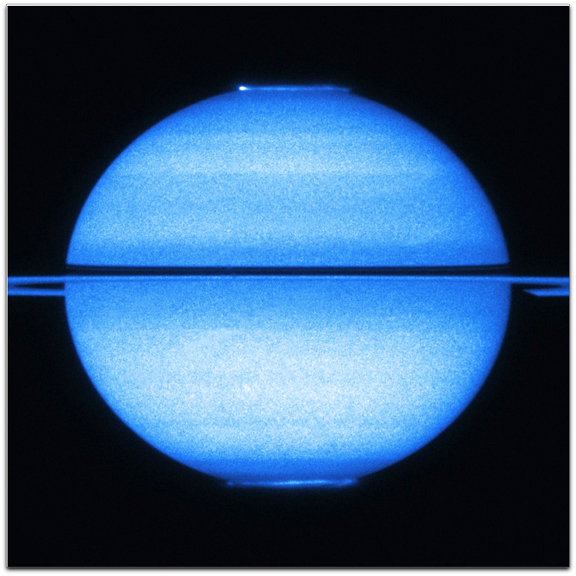 An enormous and grand ringed planet, Saturn is certainly one of the most intriguing bodies orbiting the Sun. Hubble has now taken a fresh look at the fluttering aurorae that light up both of Saturn's poles. It takes Saturn nearly 30 years to orbit the Sun, with the opportunity to image both of its poles occurring only twice in that period. Hubble has been snapping pictures of the planet at different angles since the beginning of the mission in 1990, but 2009 brought a unique chance for Hubble to image Saturn with the rings edge-on and both poles in view. At the same time Saturn was approaching its equinox, so both poles were equally illuminated by the Sun's rays.

Despite its remoteness, the Sun's influence is still felt by Saturn. The Sun constantly emits particles that reach all the planets of the Solar System as the solar wind. When this electrically charged stream gets close to a planet with a magnetic field, like Saturn or the Earth, the field traps the particles, bouncing them back and forth between its two poles. A natural consequence of the shape of the planet's magnetic field, a series of invisible "traffic lanes" exist between the two poles along which the electrically charged particles are confined as they oscillate between the poles. The magnetic field is stronger at the poles and the particles tend to concentrate there, where they interact with atoms in the upper layers of the atmosphere, creating aurorae, the familiar glow that the inhabitants of the Earth's polar regions know as the northern and southern lights.

At first glance, the light show of Saturn's aurorae appears symmetric at the two poles. However, analyzing the new data in greater detail, astronomers have discovered some subtle differences between the northern and southern aurorae, which reveal important information about Saturn's magnetic field. The northern auroral oval is slightly smaller and more intense than the southern one, implying that Saturn's magnetic field is not equally distributed across the planet; it is slightly uneven and stronger in the north than the south. As a result, the electrically charged particles in the north are accelerated to higher energies as they are fired toward the atmosphere than those in the south. This confirms a previous result obtained by the space probe Cassini, in orbit around the ringed planet since 2004.