Proba-3 To Be A First... Two Spacecraft Fly As One—Almost Like Being Married 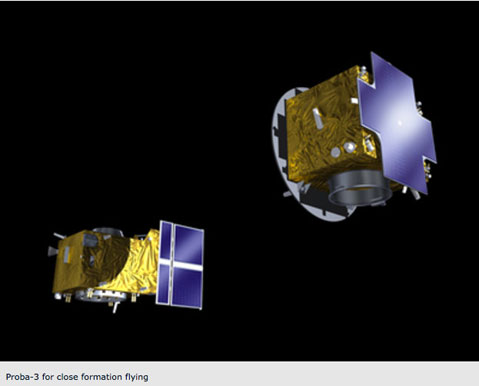 [SatNews] This will be the first mission in which two spacecraft will fly through space as a single unit...relative position accuracy to within less than one millimeter.

Spanish industry is leading the Proba-3 mission, a world first in precise formation flying. This European Space Agency (ESA) project aims to demonstrate that two satellites can move as one single object with sub-millimeter precision. This configuration will enable the creation of enormous space telescopes with the lens and detector hundreds of meters apart.

"Proba-3 will be the first mission in which two spacecraft will fly through space as a single unit, pointing at selectable directions, and with sub-millimeter precision, in other words, relative position accuracy to within less than one millimeter," Salvador Llorente, director of this project in SENER, the first Spanish company to lead an ESA mission, explained. There have been very few formation satellite missions up to now, such as the Swedish Prisma project, and only in the near Earth environment and with a level of precision of tens of centimeters.

The new mission includes two satellites weighing approximately 340 kg and 200 kg. They will be launched in 2017—several launchers are being evaluated, including one from India and another from the U.S.—and they will travel jointly attached together until they separate in a highly-eccentric orbit. Their nearest point, the perigee, will only be 600 km from Earth. Every time they pass through this zone they will be in free flight, but under well controlled trajectories.

The operations associated with precise formation flight will take place on the most distant section of the orbit, the apogee, over 60,000 km away, as here the gravitational disturbances are minimised and do not complicate or make the manoeuvres too costly. The formation technology will be tested and the planned tests will be conducted in this region of the orbit. 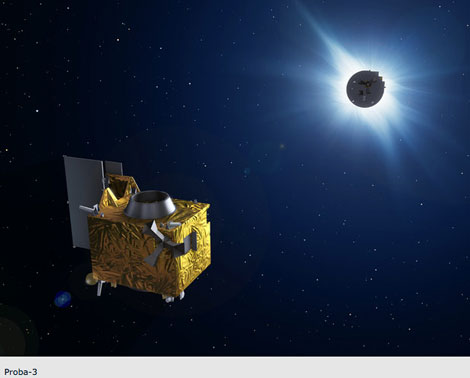 One of the relevant experiments including scientific application of Proba-3 will be blocking out the Sun with one of the craft in such a way that the other, 150 m away, can examine the Sun's corona in unprecedented detail.

The first satellite, the blocker, will create an artificial solar eclipse in order to facilitate its companion satellite, the coronograh, in gathering the data. A similar technique was already tried in 1975 on the Apollo-Soyuz mission.

"In any case, the primary objective of this mission is to validate the precision formation flight technology, and to be able to position both craft between 20 and 250 metres apart, yet always working together as if they formed a rigid structure," Llorente emphasized.

The researcher highlighted one possible application of this configuration: "If you wanted to build telescopes with long focal length, you could mount the lens on one of the satellites and the detector on the other, which was already proposed -for instance- in the case of the Xeus x-ray telescope." In this way you can avoid the need for large deployable structures and reduce the mass of the launch, apart from improving the position stability when compared with thermo-elastic distortion with such a large structure.

Proba-3 will also serve to validate several optical and laser sensors in addition to the algorithms required for future formation flight missions. Different experiments will be used to confirm that this system works properly, varying the distances between the satellites and their pointing direction.

Rendezvous tests, orbital approach manoeuvres between spacecraft in highly elliptical orbit, will also be performed and could be applied to missions to Mars. Specifically in the mission known as 'Mars Sample Return', which plans to pass a Martian rock from one craft to another.

In addition, researchers will test prevention and emergency systems with the activation of engines and other devices to avoid the risk of the satellites colliding, "a situation that entails the premature end to any mission," Llorente warned.

Although the ESA has entrusted SENER with the task of leading the project, other major partners taking part are Astrium CASA Espacio and GMV from Spain, as well as QinetiQ Space and Spacebel from Belgium. The mission's tracking station will be located in the Redu locality (Belgium), although adjustments between the two spacecraft can be programmed automatically.

The details of Proba-3 have been presented in journals such as 'Acta Astronautica' and at conferences such as the International Workshop on Satellite Constellation and Formation Flying (IWSCFF), held recently in Lisbon (Portugal). Researchers and companies from over a dozen countries are taking part in this third PRoject for On-Board Autonomy (PROBA), the ESA's advanced series of technology demonstration mini-satellites.