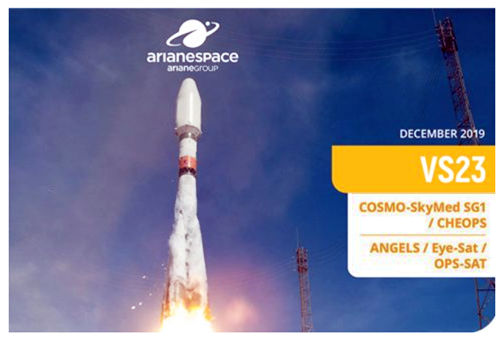 Arianespace’s next medium-lift Soyuz to be launched from French Guiana is now complete following the integration of its “upper composite,” comprised of five satellite passengers, their protective payload fairing and the Fregat upper stage.

This activity was performed at the Spaceport’s ELS launch complex near the town of Sinnamary, beginning with the composite’s transfer on a special transporter, followed by hoisting to the upper level of a purpose-built mobile gantry.

All is now ready for final checkout and Saturday’s launch readiness review, which will clear the way for a December 17 liftoff at precisely 5:54 a.m., local time in French Guiana. The mission – carrying a total payload mass estimated at 3,250 kg. – is designated Flight VS23 in Arianespace’s numbering system.

The mission’s primary passenger – COSMO-SkyMed Second Generation, an Earth Observation (EO)  spacecraft for the Italian Space Agency (ISA) and Ministry of Defence – will be deployed first during the four-hour-plus flight sequence. It was manufactured by Thales Alenia Space.

Next to be released by Soyuz is the Airbus-produced Characterizing Exoplanet Satellite (CHEOPS) – which will be used by the European Space Agency (ESA) on a mission to study bright, nearby stars that already are known to host exoplanets, in order to make high-precision observations of the planet’s size.

Completing the mission will be the deployments of three auxiliary payloads: EyeSat, for the French CNES space agency; ANGELS, for CNES and Hemeria; and OPS-SAT, for Tyvak on behalf of ESA.

Flight VS23 will be Arianespace’s third launch in 2019 with a medium-lift Soyuz vehicle. Overall, it will be the ninth flight this year using the company’s full family of launchers, which also includes the heavy-lift Ariane 5 and lightweight Vega.

On its ninth and final mission of 2019 — the third this year with the Soyuz medium-lift launcher from the Guiana Space Center (CSG) in French Guiana — Arianespace will perform a multiple launch for European institutional needs.

The COSMO-SkyMed Second Generation satellite for the Italian Space Agency and Minister of Defence will be the primary passenger of this flight, along with the Characterising Exoplanet Satellite (CHEOPS) on behalf of the European Space Agency (ESA). Three auxiliary payloads also will be on board: ANGELS and EYESAT for the French CNES space agency; and OPS-SAT for Tyvak on behalf of ESA.

Flight VS23 will be performed from the Soyuz Launch Complex (ELS) in Sinnamary, French Guiana. Liftoff is scheduled for Tuesday, December 17, at exactly:

The nominal duration of the mission (from liftoff to separation of the satellites) is: 4 hours, 13 minutes and 14 seconds.

The targeted orbits are...

The Launch Readiness Review (LRR) will occur on Saturday, December 14, 2019, in Kourou to authorize the start of operations for the final countdown. 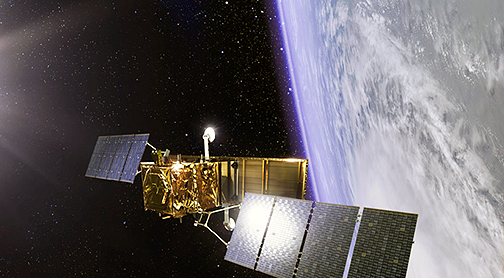 Artistic rendition of one of two, second-generation Cosmo-SkyMed radar reconnaissance satellites. Image is courtesy of Thales Alenia Space.
This satellite is an Earth Observation (EO) spacecraft and will be the fourth satellite launched by Arianespace for the Italian Space Agency (ASI) and the ninth performed in total for Italy (comprising ASI, the Italian Ministry of Defence and Telespazio). Manufactured by Thales Alenia Space (Italy), COSMO-SkyMed Second Generation will be the 162nd satellite manufactured by this constructor to be launched by Arianespace.
Characterizing Exoplanet Satellite (CHEOPS) 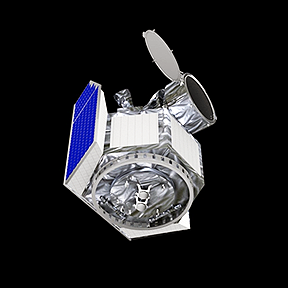 An artistic rendition of the CHEOPS satellite. Image is courtesy of ESA.
The  is an ESA mission implemented in partnership with Switzerland. This 74th satellite to be launched by Arianespace for ESA will mark the 52nd mission conducted by the launch services provider at the service of this space agency.

CHEOPS is the first mission dedicated to studying bright, nearby stars that  are already known to host exoplanets to make high-precision observations of the planet's size as it passes in front of its host star. The spacecraft will focus on planets in the super-Earth to Neptune size range, with its data enabling the bulk density of the planets to be derived — a first characterization step toward understanding these alien worlds. Airbus in Spain is prime contractor for the mission, with the University of Bern being responsible for the telescope.

Three, auxiliary, smallsat payloads will also be on board the Soyuz launcher for Flight VS23: 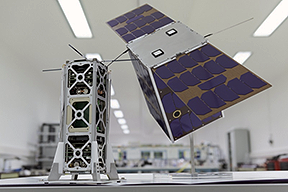 (Argos Néo on a Generic Economical and Light Satellite)
Angels is a12U cubesat, and is the French industry’s first smallsat.
It is jointly financed and developed by the French CNES space agency (Centre National d’Etudes Spatiales) and Hemeria, an innovative industrial group active in the aerospace, defense, energy, rail and automotive markets (which is an affiliate of Nexeya). 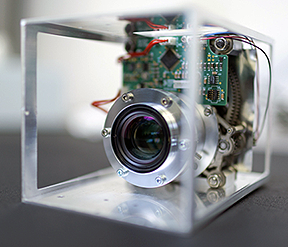 EyeSat is a 3U cubesat designed to study the zodiacal light and image the Milky Way. The EyeSat is being financed and developed by the French CNES space agency within the scope of the Janus project (Jeunes en Apprentissage pour la réalisation de Nanosatellites des Universités et des écoles de l’enseignement Supérieur), which is designed to encourage students in universities and engineering schools to develop their own smallsats. 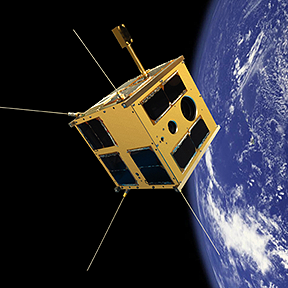 This smallsat is a 3U CubeSat, is the world’s first free-for-use, on-orbit testbed for new software, applications and techniques in satellite control. OPS-SAT was developed by the Graz University of Technology with subcontractors from Austria, Germany, Poland and Denmark. The smallsat will be operated by ESA from the European Space Operations Centre (ESOC) in Germany.