The 50th Ariane 5 was rolled out today (March 25) for launch from the Spaceport, clearing the way for tomorrow’s liftoff with a mixed civilian and military telecommunications satellite payload. Emerging from the Final Assembly Building at 10:00 a.m. under cloudy French Guiana skies, the Ariane 5 moved to the ELA-3 launch complex during a transfer process lasting 1 hr., 45 min.

The Ariane 5 is installed atop one of two operational mobile launch tables for Arianespace’s heavy-lift vehicle, and it was transferred using the rail system that links key elements of the Spaceport’s launch infrastructure. The payload fairing on this Ariane 5 carries a special “50th Ariane 5 launch” logo, signifying its milestone role in the career of Arianespace’s workhorse commercial launcher. Ariane 5 made its first demonstration flight 1996, and entered service with Arianespace in 1999.

Preparations are underway for the final countdown leading to the liftoff during a March 26 launch window that opens at 7:03 p.m. local time and continues to 7:52 p.m. (22h03-22h52 UTC). This mission will be the first of seven Ariane 5 flights planned in 2010. Its payload consists of the ASTRA 3B commercial telecommunications satellite for SES ASTRA and the COMSATBw-2 secure military relay spacecraft for the German Bundeswehr (armed forces). 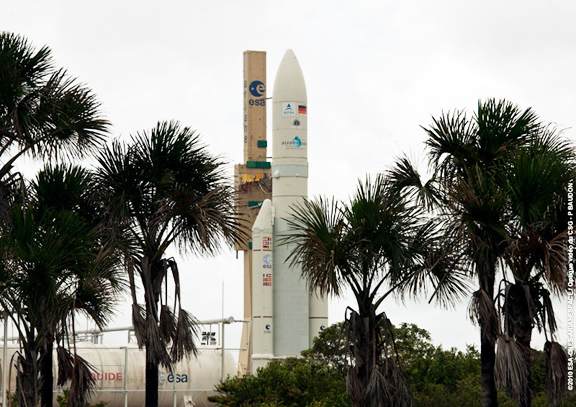 The Ariane 5 with its ASTRA 3B and COMSATBw-2 satellites is transferred to the Spaceport’s ELA-3 launch complex in French Guiana. Photo: Arianespace


ASTRA 3B is installed in the upper passenger position of Ariane 5’s dual payload “stack,” and is to be released at just under 28 minutes into the flight. Built for SES ASTRA by EADS Astrium, ASTRA 3B has a liftoff mass of approximately 5,471 kg. and carries 60 active Ku-band transponders, along with four Ka-band transponders. After its deployment by Ariane 5, ASTRA 3B will be located at 23.5 degrees East. This is ASTRA's orbital position for delivering DTH broadcast services, mainly to the Benelux and Eastern Europe countries — also enabled will be two-way broadband services across Europe and the Middle East.

The COMSATBw-2 spacecraft is riding as the Ariane 5’s lower passenger, and is positioned under the launcher’s SYLDA 5 payload dispenser. The 2,440-kg. satellite was designed, integrated and tested by Thales Alenia Space on behalf of EADS Astrium — the program’s space segment prime contractor. COMSATBw-2 will be separated from Ariane 5 at approximately 33 min. 20 sec. into the flight, and is to operate from an orbital position of 63 degrees East. It is equipped with four SHF-band transponders and five UHF-band transponders, and will provide a secure broadband network for uninterrupted communications between the German government, military authorities and armed forces deployed around the world. It follows the COMSATBw-1 satellite, which was orbited by Ariane 5 last October.