Indian Space Research Organisation (ISRO) on Sunday successfully conducted a night launch of its trusted workhorse Polar Satellite Launch Vehicle C-42 (PSLV C-42) carrying two UK satellites. This was the full commercial launch after many years as no Indian satellite was launched this time and both the UK satellites were the main payload. 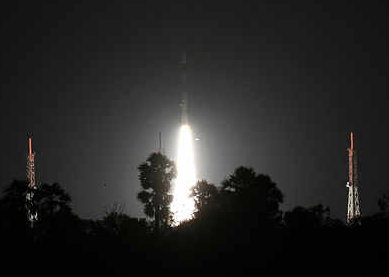 The PSLV carrying two British satellites—NovaSAR and S1-4, together weighing over 889 kg—lifted off at 10.08 pm from the first launchpad of Sriharikota and placed both Earth observation satellites into the sun-synchronous orbit at a height of 583 km. The four-staged PSLV rocket, standing 44.4 metres tall and weighing 230.4 tonnes, injected both the satellites into their orbit 17 minutes and 45 seconds after the launch.

The foreign satellites, developed by Surrey Satellite Technologies Ltd, UK, are meant for forest mapping, flood, environment and disaster monitoring. The launch comes almost six months after ISRO successfully placed the navigation satellite INRSS-1I in orbit on April 12. This was the 44th flight of the PSLV and the third launch by ISRO this year. The rocket was launched at night on the request of the British company which chose the time so that its satellites could reach a specific orbit.

Congratulating space scientists, ISRO chairman K Sivan said the mission was a success. “Today I am extremely happy to announce that PSLV-C42 carrying two customer satellites NovaSAR and S1-4 placed them precisely in orbit. Within the next six months, 10 satellite missions and eight launch vehicle missions would be launched — one every two weeks,” he said. Prime Minister Narendra Modi also lauded scientists for the successful mission. In a tweet, he said, “Congratulations to our space scientists! ISRO successfully launched PSLV C42, putting two UK satellites in orbit, demonstrating India’s prowess in the competitive space business.”

This is also not the first time ISRO has launched the full commercial launch. On April 23, 2007, the space agency had for the first time launched a rocket solely for commercial purpose. Its PSLV-CA carried Italy’s astronomical satellite AGILE as the main payload. Thereafter, on July 10, 2015, ISRO achieved another milestone when it carried out the heaviest commercial mission successfully as its PSLV-XL lifted off with five UK satellites together weighing 1,439 kg.

Till now, ISRO has launched 237 foreign satellites of 28 countries. ISRO is, therefore, making all efforts to be competitive and wants to launch more and more commercial satellites to capture a lion's share of the global market.

by Surendra Singh Times of India