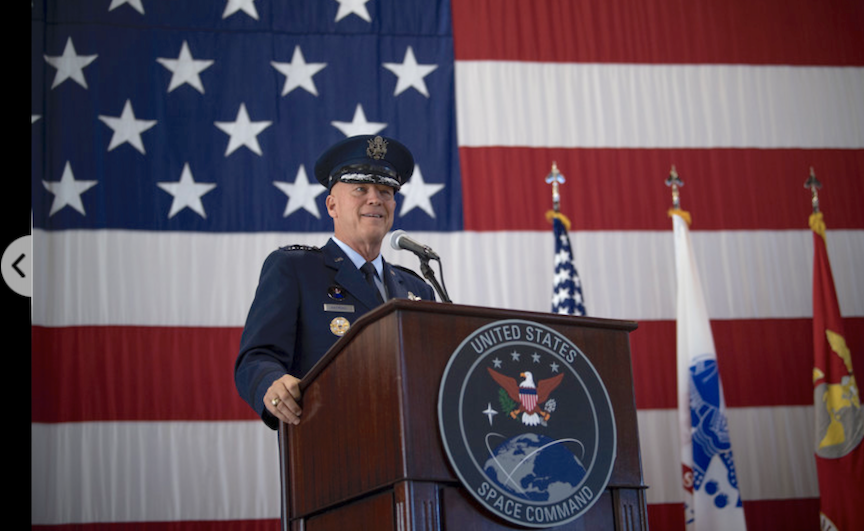 Gen. John W. “Jay” Raymond, U.S. Space Command commander, recognized the establishment of the nation’s 11th combatant command in a joint ceremony at Peterson Air Force Base, Sept. 9 2019. The USSPACECOM mission is to deter aggression and conflict, defend U.S. and allied freedom of action, deliver space combat power for the Joint/Combined force, and develop joint warfighters to advance U.S. and allied interests in, from, and through the space domain. (U.S. Air Force photo by Staff Sgt. Dennis Hoffman)

SCHRIEVER AIR FORCE BASE, Colorado — All of the work put in by Team Schriever Airmen in 2019 paved the way for new advancements in the continuously evolving space and cyberspace warfighting domains.

The members met with an FA-40 from USASMDC to build a smart book with standardized GWCC products to include spike charts, which will be provided to the Army’s three Combat Training Centers to be used in the preparation for deployment to combat zones.

“By providing these products for use in training the BCTs, we hope to make more warfighters aware of the support we can provide and the avenues to request our support,” said 1st Lt. Savanna Whitaker, 2nd SOPS GWCC deputy director, one of the lead mission analysts for the GWCC.

The Airmen spent two days at the WSOC talking to various operators from Alpha Co., 53rd Signals Battalion. 50th OSS’s goal in the visit was to improve their processes in supporting Alpha Co. through intelligence product distribution and threat overviews.

“The impact was great for Alpha Co. to see and hear from 50th OSS Intel, give them a better understanding of the intelligence available to support and assist with their daily operations through intelligence product distribution and increase their knowledge on current and future threats to space operations,” said Senior Airmen Devin Vega, 50th OSS intelligence analyst.

Milstar is responsible for providing the President, Secretary of Defense and the U.S. armed forces with reliable satellite communications, ensuring minimal interception or detection.

“From a 4th Space Operations Squadron perspective, we are amazed at the longevity of this satellite,” said John Rogers, military satellite communications programs site manager. “Milstar had a design life of ten years, the satellite has lasted two and a half times its design life - a truly impressive accomplishment.”

The course changes and expands the approach to achieving space situational awareness among satellites and builds on the knowledge 3rd SES Airmen learn during initial technical training.

To kick off May, the 4th SOPS accepted control of a new satellite in their constellation, Advanced Extremely High Frequency-4 from the Space and Missile Systems Center and 14th Air Force in a satellite control authority ceremony here.

“The addition of this satellite to the protected communications constellation further promotes Schriever and America as being the masters of space,” 1st Lt. Scott Podlogar, 4th SOPS satellite engineer, said.

During the summer, Gen. Jay Raymond, United States Space Command commander, hosted an all-call as part of the command’s space warfighting road show July 29 at the base fitness center.

Hundreds of 50th Space Wing personnel and mission partners, such as the National Space Defense Center, participated in the discussion that highlighted the growing importance of the base’s missions.

“Space is critical to everyday life,” Raymond said. “It’s vital to our national security, and our adversaries know this. You are multi-domain leaders of the future. We need to compete, deter and win.”

On the same day as the all-call, Lockheed Martin presented the 2nd Space Operations Squadron with a GPS Block III model satellite to celebrate the successful on-orbit testing of the new GPS III satellite here.

Capt. Kaoru Elliot, 2nd SOPS assistant director of operations, said it is important to stay at the forefront of the space mission.

“With the introduction of the GPS III, the advanced capabilities onboard the satellite will ensure we continue to provide the best for our civilian users and bring new capabilities to warfighters to operate through the contested environment,” he said. “The 2nd SOPS and GPS are the global gold standard for all Global Navigation Systems.”

At the direction of the President of the United States, the Department of Defense established U.S. Space Command as the 11th unified combatant command, with Raymond as its congressionally confirmed commander. Establishing USSPACECOM is a critical step that underscores the importance of the space domain and its strategic contributions to U.S. national security.

“The scope, scale and complexity of today’s threat is real and it is concerning,” Raymond said. “The establishment of a combatant command solely focused on the space domain demonstrates the United States’ commitment to protecting and defending its space assets against that threat.”

At the beginning of autumn, the 4th SOPS officially gained command of the Enhanced Polar System satellite. EPS adds two satellites to 4th SOPS, increasing the squadron’s arsenal to 25 satellites.

“This is an amazing accomplishment and shows how our squadron has been able to adapt and overcome the many obstacles presented by space,” said Lt. Col. Timothy Ryan, 4th Space Operations Squadron commander. “Our operators work tirelessly around the clock to ensure the United States maintains space superiority.”

In October, the 2nd SOPS decommissioned Satellite Vehicle Number 38, after 22 years, design life of 7.5, to give way to the next generation of GPS III satellites.

The squadron surprised Senior Master Sgt. Blair Burdick II, 2nd SOPS superintendent, who will retire from the Air Force in March 2020, with the opportunity to give the last shut-off command to SVN-38, effectively retiring the satellite.

“It was awesome,” he said. “I was here working in 1st Space Operations Squadron back in 1999 sending commands to SVN-38. That was 20 years ago and on a much older operational system. In March, I am ending my Air Force career and it’s kind of cool to complete this SVN’s Air Force career too. It means a lot.”

Also in October, the Cyber Defense Correlation Cell for Space stood up here, and will operate at the enterprise level by detecting and responding to cyber threats against Air Force Space Command mission systems.

The CDCC-S is the first of its kind in the Air Force and has more than 50 civilian and military personnel working alongside 30 contractors.

“Our cyber defenses must be better today than they were yesterday and better tomorrow than they are today, and that pattern must continue indefinitely,” said Maj. Gen. Stephen Whiting, 14th Air Force commander. “Our space systems will be safer, and in the end, the work you do here today will keep America and our allies safer as well.”

In November, the 50th Operations Support Squadron began its largest class to train 64 space operators. The course is expected to send Airmen to the 2nd SOPS and the 4th SOPS upon their graduation April 15, 2020.

This is in response to the new officer undergraduate space training and enlisted space training courses being taught at Vandenberg Air Force Base, California.

“The new course will provide a base-level foundation for space operators,” Master Sgt. Carl White, 50th Operations Support Squadron operations support flight chief said. “The course is constantly evolving alongside our mission to ensure we can better meet the needs of the Air Force.”

All of these achievements will continue to pave the way for future advancements in space operations, ensuring the United States stays at the forefront of space and cyberspace warfighting realms.