[SatNews] ..."but also validated the concept that we could build new satellites on orbit by physically aggregating satlets in space...”

Successful initial efforts fuel next steps toward developing technologies that would enable assembly of more flexible, scalable and cost-effective space systems on orbit

The process of designing, developing, building and deploying satellites is long and expensive. Satellites today cannot follow the terrestrial paradigm of “assemble, repair, upgrade, reuse,” and must be designed to operate without any upgrades or repairs for their entire lifespan—a methodology that drives size, complexity and ultimately cost. These challenges apply especially to the increasing number of satellites sent every year into geosynchronous Earth orbit (GEO), approximately 22,000 miles above the Earth. Unlike objects in low Earth orbit (LEO), such as the Hubble Space Telescope, satellites in GEO are essentially unreachable with current technology. 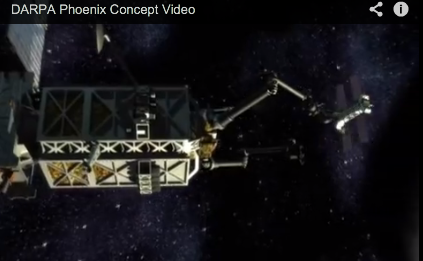 DARPA created the Phoenix program to help address these daunting challenges. Phoenix seeks to change the current paradigm by enabling GEO robotics servicing and asset life extension, while developing new satellite architectures to reduce the cost of space-based systems. Specifically, Phoenix’s goal is to develop and demonstrate technologies that make it possible to inspect and robotically service cooperative space systems in GEO and to validate new satellite assembly architectures. Phoenix has achieved promising Phase 1 results and has awarded eight companies prime contracts for its Phase 2 efforts.

“Phase 1 not only showed the feasibility of our robotic tools and assembly techniques, but also validated the concept that we could build new satellites on orbit by physically aggregating satlets in space,” said David Barnhart, DARPA program manager. “These successes could eventually lead to the revolutionary ability to create new, truly scalable space systems on orbit at a fraction of current costs.”

Advanced GEO space robotics: DARPA is developing a variety of robotics technologies to address key on-orbit mission needs, including assembly, repair, asset life extension, refueling, etc., in the harsh environment of geosynchronous orbit. Development activities include the maturation of robotic arms and multiple generic and mission-specific tools. These technologies would be part of a future robotic assembly platform, the Servicer/Tender.

Satlets also physically aggregate (attach together) in different combinations that would provide capabilities to accomplish a range of diverse space missions with any type, size or shape payload. Because they are modular, they can be produced on an assembly line at low cost and integrated very quickly with different payloads. DARPA is presently focused on validating the technical concept of satlets in LEO.

Payload Orbital Delivery (POD) system: The POD would be a standardized mechanism designed to safely carry a wide variety of separable mass elements to orbit—including payloads, satlets and electronics—aboard commercial communications satellites. This approach would take advantage of the tempo and “hosted payload” services that commercial satellites now provide while enabling lower-cost delivery to GEO. DARPA is also pursuing a possible risk-reduction flight to validate the POD technology, which could eventually provide “‘FedEx®’ to GEO” capabilities to make future space deliveries to high orbit much easier and faster.
“Individually or together, these technologies could help enable not just Phoenix’s original concept of re-use, but a broad class of other robotically enabled missions at GEO as well,” Barnhart said. “They could help satellites reach new or proper orbits, inspect satellites as part of routine maintenance or troubleshooting efforts, repair or replace worn-out components, or add or upgrade capabilities. These capabilities would enable space systems, for the first time, to have the flexibility, accessibility and resilience that designers of terrestrial systems take for granted.”

DARPA has awarded prime contracts for Phase 2 of Phoenix to the following companies: