Spaceflight has announced the details behind their SSO-A mission, the largest, single, rideshare mission from a U.S.-based launch vehicle, to date.

Spaceflight has contracted with more than 70 spacecraft from approximately 35 different organizations to launch from a SpaceX Falcon 9 later this year. The mission, named SSO-A: SmallSat Express, represents the company’s purchase of an entire Falcon 9 to accommodate the growing number of domestic, international, government and commercial customers seeking affordable rideshare options to launch their spacecraft into orbit. 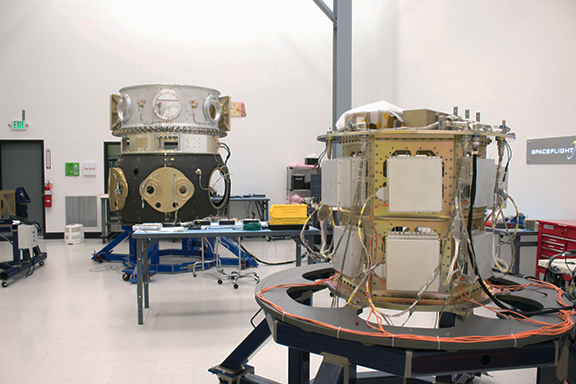 Planet is sending two SkySat smallsats, the primary spacecraft on the launch, along with several Dove cubesats. They are also sponsoring the launch of two cubesats: one from Georgia Institute of Technology and one from University of Colorado Boulder Laboratory for Atmospheric and Space Physics.

Among the spacecraft onboard, 23 are from universities, 19 are imaging satellites, 23 are technology demonstrations, two are art exhibits, and one is from a high school. Seventy-five percent are commercial spacecraft.

With the majority of the spacecraft being integrated in Spaceflight’s Auburn, Washington-facility, the stack is one of the most complex and intricate endeavors the company has undertaken. The smallsats will be integrated with a variety of dispensers and avionics to an upper free flyer and lower free flyer. Spaceflight is handling all the mission management planning, engineering, integration, mission assurance and system engineering processes, regulatory and policy procedures, contracting, and business development for the mission.

Spaceflight has launched more than 140 satellites to date from a variety of launch vehicles including Falcon 9, PSLV, Dnepr, Antares, and Soyuz. The company recently announced agreements for launches on Electron, Vega, and LauncherOne. The company has already launched 22 spacecraft on two missions this year and has plans to launch 97 more across six upcoming missions to LEO and GEO by the end of 2018. Additionally, the company has plans for approximately 10 scheduled missions in 2019.

Curt Blake, President of Spaceflight, said that the company's inaugural, dedicated, rideshare mission, SSO-A: SmallSat Express, is a momentous milestone for Spaceflight. Launching more than 70 satellites from one launch vehicle is a challenging feat and the firm's talented team has made many advances to make this historic launch a reality. As demand for affordable launch options continues to grow, dedicated rideshare missions will play an important role in providing frequent and reliable access to space.

Dr. John M. Morrison, Professor, Department of Physics and Physical Oceanography and Center for Marine Science at UNC-Wilmington, added that thanks to a grant from the Gordon and Betty Moore Foundation, UNC-Wilmington is ready to launch the first cubesat equipped to provide scientists around the world with a new instrument to study the ocean. This has been a tremendous team effort with NASA and others to design and build the low-cost, next generation, miniature ocean color sensors aboard a cubesat, and we’re excited to work with Spaceflight to see it off into orbit. By making the data from the SeaHawk-1 available to everyone for free, our hope is to address a number of critical societal needs, especially in coastal regions.

Innovation, such as the actions described above, is at the heart of the upcoming business and finance focused Satellite Innovation event, which will be in session from October 8 through 11 in Silicon Valley, California. Attendees will dive into the future, as new and innovative technologies, products and expertise are presented during the event, all to assist in driving business success in the space and satellite market segments. For additional information and to register to attend, please visit satinnovation.com.