First Two PlanetiQ Weather Satellites To Be Launched By Antrix

[Satnews] PlanetiQ has signed a contract with Antrix Corporation Limited, the commercial arm of the Indian Space Research Organization (ISRO), for the launch of PlanetiQ’s first two weather satellites on a Polar Satellite Launch Vehicle (PSLV) during the fourth quarter of 2016.

Ten more satellites are planned for launch in 2017 to complete an initial set of 12 satellites that will dramatically improve global weather forecasting, climate monitoring and space weather prediction, and enable advanced analytics for numerous industries worldwide. The ISRO’s PSLV is among the world’s most reliable launch vehicles with 30 consecutive successful flights. The PSLV has launched 51 satellites for international customers from 20 countries, in addition to 33 Indian national satellites.

Each of PlanetiQ’s 10-kilogram microsatellites will fly PlanetiQ’s Pyxis-RO™ sensor, the most advanced satellite weather sensor in such a small package that can penetrate through clouds and storms down to the Earth’s surface. Pyxis-RO uses a technique called radio occultation to track the bending of GPS and other signals as they travel through Earth's atmosphere, and then converts the bending angle into high-precision measurements of global temperature, pressure and water vapor in the atmosphere, and electron density in the ionosphere. 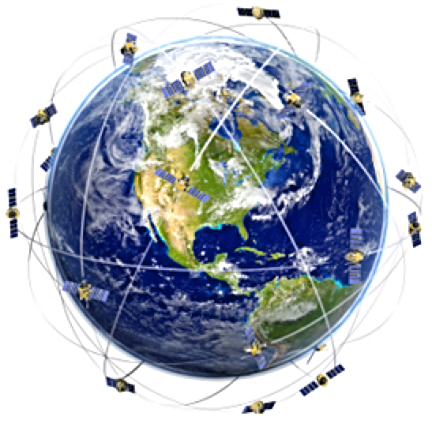 Artistic rendition of the PlanetiQ constellation.

Pyxis-RO quadruples the data collection capability of radio occultation sensors on orbit today by tracking signals from all four major satellite navigation systems—GPS, Galileo, Beidou and GLONASS. With 12 satellites on orbit, PlanetiQ will collect approximately 34,000 “occultations” per day, evenly distributed around the globe with high-density sampling over both land and water. Each occultation is a vertical profile of atmospheric data with very high vertical resolution, comprised of measurements less than every 200 meters from the Earth’s surface up into the ionosphere. The data is similar to that collected by weather balloons, but more accurate, more frequent and on a global scale.

“The stellar track record of the PSLV combined with our seven-year satellite design life provides the reliability and data continuity not just desired, but required by the operational weather forecast community,” said Chris McCormick, Chairman and CEO of PlanetiQ. “Within days after launch, we will validate and start delivering high-quality data and services to our customers.”

“The world today lacks sufficient data to feed into weather models, especially the detailed vertical data that is critical to storm prediction. That’s why we see inaccurate or ambiguous forecasts for storms like Hurricane Joaquin, which can put numerous lives at risk and cost businesses millions of dollars due to inadequate preparation or risk management measures,” McCormick said. “Capturing the detailed vertical structure of the atmosphere from pole to pole, especially over the currently under-sampled oceans, is the missing link to improving forecasts of high-impact weather.”