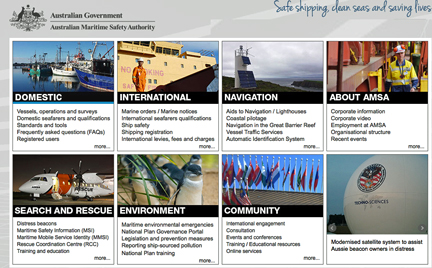 The MEOSAR (Medium-altitude Earth Orbit Search and Rescue) installations will be the first such systems in Asia Pacific and will significantly reduce the time between a distress beacon activation and the resulting emergency alert notification from hours to minutes, greatly accelerating the rescue coordination effort by SAR personnel.  As a result, survivors will be found faster and more lives will be saved. The deal, which exceeds €13 million (approximately $17 million USD), includes a six-antenna MEOSAR satellite ground station system (MEOLUT) in each country, a common Mission Control Center (MCC) in Canberra and associated support and maintenance.  Installation is scheduled to start in September 2014 and is expected to take 15 months.  The installation phase will be followed by a 10-year maintenance period.

In a typical satellite-based search and rescue scenario, ships, aircraft or individuals transmit distress signals from an emergency location beacon via satellite to a fixed ground receiving station, or local user terminal (LUT).  The ground receiving station calculates the location of the emergency and generates an alert for the appropriate rescue authorities.  Today, the beacon-to-alert process depends on a limited number of Low-altitude Earth Orbit (LEO) satellites and may take several hours before a position is confirmed.  The development and implementation of MEOSAR will reduce this time to minutes.

“Australia and New Zealand have two of the largest SAR regions in the world, and we are pleased to help them create a more responsive system for those needing assistance in an emergency," said Jean-Yves Courtois, CEO of Orolia and McMurdo Group.  "This key win and TSi’s recent deployment of the only two MEOSAR systems in another major SAR region—the United States—firmly establish McMurdo Group as the premier MEOSAR infrastructure provider globally."

“We are committed to working with AMSA and MNZ to implement a comprehensive search and rescue solution based on state-of-the-art technology and supported by best-in-class customer services including training, consultation and maintenance,” added Jean-Luc Abaziou, CEO of TSi and head of McMurdo Group’s SAR Infrastructure Business Unit.  “This focus on support will optimize uptime and ensure the safety of individuals whether in maritime, aviation or outdoor recreation.”

“Australia has the second largest number of registered distress beacons in the world,” said AMSA’s Chief Executive Officer Mick Kinley.  “AMSA is continually looking to take advantage of new technology in its search and rescue system, and the MEOSAR system will allow us to detect and respond to beacon activations in a more timely manner.  The awarding of the contract to TSi has been the result of a rigorous tender process, and AMSA is confident its engagement of TSi will enable AMSA to stay at the forefront of life-saving technology.”

“The Rescue Coordination Centre New Zealand (RCCNZ) has a very challenging task operating over a vast search and rescue area,” said Director of Maritime New Zealand Keith Manch. “MEOSAR will provide even greater confidence for those operating in the region – whether on land, sea or in the air – that the staff of RCCNZ are supported by the latest in SAR technological innovation.  We are confident in TSi’s abilities to design, develop and install a MEOSAR system that will be at the center of our search and rescue operations in years to come.”

TSi, which was acquired by McMurdo Group in May 2014, has been instrumental in the development of the COSPAS-SARSAT international satellite-based SAR program, which has helped to save nearly 37,000 lives worldwide since 1982.  The company is also actively involved in MEOSAR, the next-generation COSPAS-SARSAT system, which will greatly improve the existing SAR process with near-instantaneous detection, identification and location of emergency distress beacons.  TSi installed the world’s first operationally ready six-channel MEOLUT in 2011 for the U.S. National Oceanic and Atmospheric Administration (NOAA) in Hawaii and earlier this year completed a second NOAA MEOLUT installation in Miami, Florida.

MEOSAR, currently in its Demonstration and Evaluation phase, is expected to have Initial Operational Capability in 2016 and Full Operational Capability by 2018.  MEOSAR will use SAR-enhanced Galileo (Europe), GPS (US) and GLONASS (Russia) satellite constellations for greater global coverage and includes innovative end-user beacon functionality such as a return-link service on Galileo satellites to acknowledge distress signal receipt and provide ongoing rescue effort status.

The AMSA infosite is located at http://amsa.gov.au/

The MNZ infosite may be accessed at http://www.maritimenz.govt.nz/