Poland and USSTRATCOM Agree to Share Space Services and Data


United States Strategic Command and the Polish Space Agency signed an agreement for space situational awareness (SSA) services and data at the 35th Space Symposium in Colorado Springs, Colorado, 10 April 2019. Agreements like these lay the foundation that allows the United States to share information with allies and partners.

Rear Admiral Richard Correll, director of plans and policy for USSTRATCOM, signed the agreement, which bolsters the United States’ and Poland’s awareness in the space domain. Poland is a stalwart ally in Central Europe and one of the United States’ strongest partners on the continent in fostering security and prosperity regionally, throughout Europe, and the world. 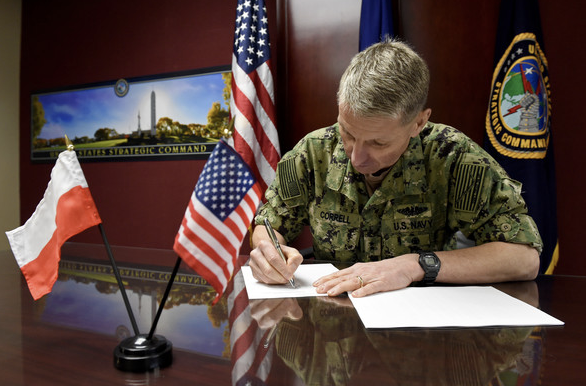 “This agreement expands our already strong military and economic partnership into another domain,” said Correll. “Agreements like this one, between responsible nations, are critical to setting norms that encourage peaceful space operations.”

“The agreement with USSTRATCOM will support enlarging Polish SSA capabilities, in particular developing an SSA Operations Center in Poland, which will serve to enhance safety of Polish and allied satellites in space, among other goals,” said Michal Szaniawski, acting President of the Polish Space Agency. “Signing the document is also a first step to broaden the SSA cooperation between Poland and the USA.”