Orbital's Cygnus™ Travels To 'There' And Back + Takes Out The Garbage... Successful Cargo Delivery To ISS (Service Provider)

[SatNews] Prior to its departure from the station, the astronauts loaded the cargo module with approximately 3,550 pounds (1,615 kilograms) of items for disposal.

Orbital Sciences Corporation (NYSE: ORB), one of the world’s leading space technology companies, today announced the successful completion of its third cargo delivery mission to the International Space Station in the past 10 months, including the initial demonstration flight completed in October 2013 and the first two operational missions under the company’s $1.9 billion Commercial Resupply Services (CRS) contract with NASA.  The company also noted that it is nearing the launch of its third CRS mission of 2014, which is currently scheduled to take place in mid-October. 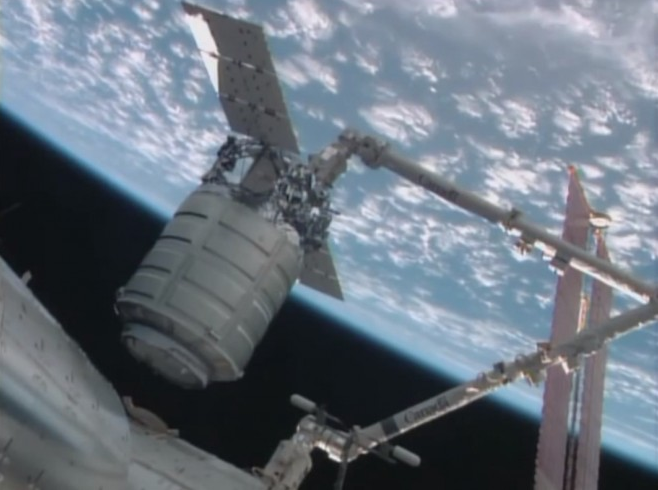 The Cygnus™ spacecraft that carried out the cargo delivery mission for the second CRS mission, known as “Orb-2,” unberthed from the ISS on August 15, completing a 31-day stay at the orbiting laboratory.  Yesterday, Cygnus reentered Earth’s atmosphere over the Pacific Ocean east of New Zealand at approximately 9:15 a.m. (EDT) marking the successful conclusion of the Orb-2 mission. Orbital originally developed the Cygnus cargo spacecraft as part of a joint research and development initiative with NASA.  Cygnus consists of a common Service Module (SM) and a Pressurized Cargo Module (PCM).

“Orbital’s third cargo delivery mission to the International Space Station concluded with the controlled reentry of Cygnus over the unpopulated expanses of the Pacific Ocean,” said Mr. Frank Culbertson, Executive Vice President and General Manager of Orbital’s Advanced Programs Group.  “From start to finish, we are very pleased with the results of this mission.  Our team is proud to be providing essential supplies to the ISS crew so they can carry out their vital work in space.  With three fully successful cargo delivery missions now complete, it is clear our public-private partnership with NASA is proving to be a positive asset to the productivity of the ISS.  We are looking forward to the next Antares launch and the Cygnus cargo delivery mission that is coming up in about two months.”

The Orb-2 mission began on July 13 when Orbital’s Antares™ rocket launched Cygnus into orbit from the Mid-Atlantic Regional Spaceport (MARS) located at NASA’s Wallops Flight Facility in Eastern Virginia.  Cygnus, which carried 3,669 pounds (1,664 kilograms) of cargo and science payloads, berthed with the ISS three days later on July 16.  Prior to its departure from the station, the astronauts loaded the cargo module with approximately 3,550 pounds (1,615 kilograms) of items for disposal.

Under the CRS contract with NASA, Orbital is using Antares and Cygnus to deliver up to 44,000 pounds (20,000 kilograms) of cargo to the ISS over eight missions through late 2016.  For these missions, NASA will manifest a variety of essential items based on ISS program needs, including food, clothing, crew supplies, spare parts and equipment, and scientific experiments.

Preparations are already well advanced for the next Cygnus cargo delivery flight, the Orb-3 mission, scheduled to take place in October.  The Antares rocket is now undergoing final assembly and testing at Wallops Island, while the Cygnus spacecraft is being prepared for shipment from Orbital’s Dulles, VA production facilities to the Wallops launch site in September.  The Orb-3 flight is expected to deliver its heaviest cargo manifest yet, with 5,050 pounds (2,290 kilograms) of cargo and payloads to be sent to the ISS. The SM incorporates avionics, power and propulsion systems already successfully flown aboard dozens of Orbital’s LEOStar™ and GEOStar™ satellite products.  The PCM, designed and built by Thales Alenia Space under a subcontract from Orbital, is based on the Multi-Purpose Logistics Module (MPLM) used with the Space Shuttle.

The Antares medium-class launch vehicle represents a major increase in the payload launch capability that Orbital can provide to NASA, the U.S. Air Force and commercial customers compared to its heritage small-class space launch vehicles such as Pegasus, Taurus and Minotaur. The Antares rocket can launch spacecraft weighing up to 14,000 pounds (6,400 kilograms) into low-Earth orbit, as well as lighter-weight payloads into higher-energy orbits.  Orbital’s newest launcher has completed four successful missions and is currently on-ramped to both the NASA Launch Services-2 and the U.S. Air Force’s Orbital/Suborbital Program-3 contracts, enabling the two largest U.S. government space launch customers to order Antares for “right-size and right-price” launch services for medium-class spacecraft.  For more information on Antares, please visit.