[SatNews] Officials stated there would be 10 launches of the Proton, down from a planned manifest of 14, without citing a reason for the decrease.

(RIA Novosti) – A Russia-Kazakhstan working group will finalize its recommendations this week on the frequency of launches of the Proton rocket, Kazakh media reported Monday.

A spokesperson for the Kazakh presidential administration said the bilateral working group will meet this week for the third time to consider ways to minimize the environmental impact of Proton launches, according to the state-owned Kazinform news agency. Citing environmental concerns, Kazakhstan has repeatedly urged Russia to phase out launches of the rocket, which uses a highly-toxic fuel called UDMH and is launched from the country’s Baikonur space center leased by Moscow.

The Proton is the largest of Russia’s fleet of space launch vehicles, and has carried both government and commercial payloads.

In July, a Proton rocket crashed shortly after liftoff showering the surrounding countryside with 600 tons of flaming propellants. 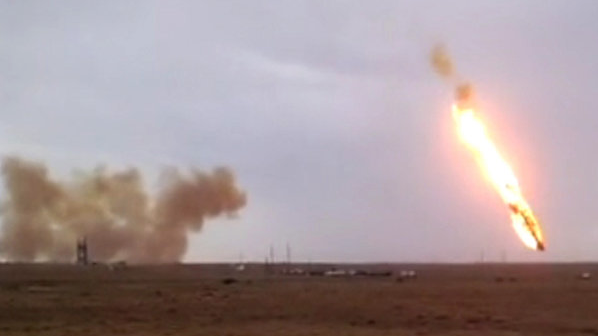 Launches of the Proton were suspended for three months following the accident and the two governments quarreled over the nearly $90 million clean-up bill.

Five of the rockets have been launched since then, and the next is scheduled to lift two Russian telecommunications satellites into orbit next month.

A Kazakh space official said last week that there would be 10 launches of the Proton this year, down from a planned manifest of 14, without citing a reason for the decrease.

Russian President Vladimir Putin announced in December that the two countries had agreed on a three-year roadmap for joint utilization of Baikonur, including Proton launches.

That agreement reportedly also included provisions for the transfer of a new launchpad, called Baiterek, from Russian to Kazakh ownership. But last week, Talgat Musabayev, the head of Kazakhstan’s space program, said that the transfer has been stalled by Russian federal agencies.

Moscow currently leases Baikonur – the launch site of Sputnik and Yury Gagarin and the only facility capable of launching the Proton – from Kazakhstan for $115 million annually.