[SatNews] Components for another heavy-lift Ariane 5 have arrived at the Spaceport as Arianespace maintains its sustained launch rate for 2010 and beyond, meeting the requirements of its growing international customer base. 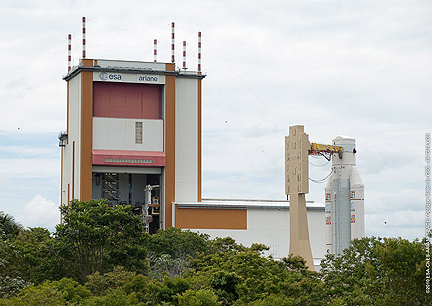 The vehicle delivered this week was transported by the MN Toucan, which is one of two roll-on/roll-off ships used to carry Arianespace launchers and related equipment from Europe to French Guiana. It will be used for the 199th launch of an Ariane family vehicle, and is to loft a dual-passenger payload of the Hispasat 1E and KOREASAT 6 satellites before the end of this year.

Hispasat 1E was built by Space Systems/Loral using an LS 1300 platform and will have an estimated liftoff mass of 5,270 kg. Fitted with 53 active Ku-band transponders, the powerful satellite will provide Hispasat with additional capacity, enabling it to offer a broader range of video and data transmission services with European and pan-American coverage from an orbital position of 30 degrees West. KOREASAT 6 will weigh about 2,750 kg. at launch, and is to carry 30 Ku-band transponders. Produced by Thales Alenia Space using a Star-2 platform from Orbital Sciences Corporation, the KOREASAT 6 satellite will provide telecommunications and broadcasting services throughout Korea from an orbital position at 116 degrees East.

The mission with KOREASAT 6 and Hispasat 1E will be the sixth, and concluding, Ariane 5 launch for 2010, and is to follow Arianespace’s upcoming flight on November 25 — which will orbit the Intelsat 17 and HYLAS 1 spacecraft.