Rocket Lab will not be making a launch attempt today due to unfavourable weather conditions.

The US orbital launch provider had hoped Monday would be third time lucky and a rocket would be launched into orbit from Mahia, after two scrubbed launches. 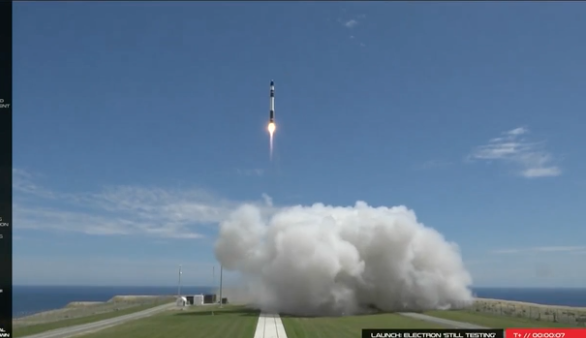 Photo of a previous launch

However, on Saturday night, a Rocket Lab spokesperson said weather conditions meant they would not be making a launch attempt on Monday.

A mechanical issue with equipment in the Chatham Islands put paid to the company's plans to launch from Onenui Station on Saturday, and Rocket Lab technicians halted the countdown process at T minus 23 minutes.

"The down range tracking dish that caused the scrub on 23 June NZST is now up and running, but weather conditions for tomorrow are unfavorable," the spokesperson said.

The next launch attempt will be no earlier than 12.30pm on Tuesday.

The spokesperson said problems recovering a downrange ground station in the Chatham Islands, which would track the Electron rocket as it climbs into orbit, was the reason for scrubbing the Saturday launch.

Repair crews had been sent to the Chatham Islands with spare parts for the dish which caused the scrub.

The payload for the launch included (among others) IRVINE01, an educational payload from the Irvine CubeSat STEM Programme (ICSP), and NABEO, a drag sail technology demonstrator designed and built by High Performance Space Structure Systems GmBH.

The NABEO drag sail was created to passively de-orbit inactive small satellites. The small sail was an ultra-thin membrane which could be coiled up tightly within a spacecraft and deployed at the end of its orbital lifespan.

The Irvine CubeSat STEM Program was a joint educational endeavour to teach, train and inspire the next generation of STEM professionals. It comprised students from six American high schools and powered by private sector donation through Irvine Public Schools Foundation.

The payload will also include mini-satellites to provide commercial ship-tracking and weather monitoring services.