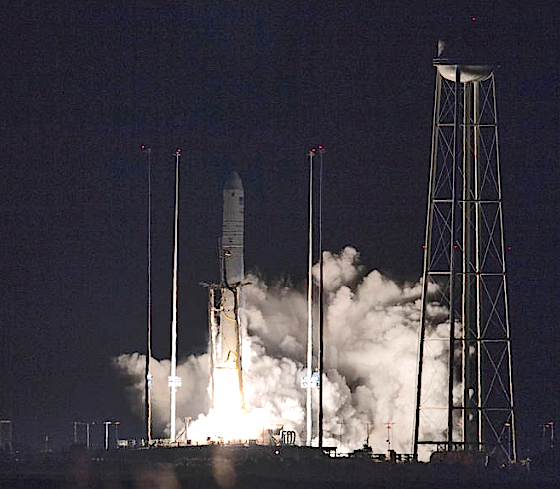 Extreme dark and extreme light were what happened simultaneously as Northrop Grumman's Cygnus spacecraft was launched and is on its way to the International Space Station with about 7,400 pounds of cargo after launching at 4:01 a.m. EST Saturday from NASA’s Wallops Flight Facility on Virginia’s Eastern Shore.

The spacecraft launched on an Antares 230 Rocket from the Virginia Mid-Atlantic Regional Spaceport’s Pad 0A at Wallops on the company’s tenth cargo delivery flight, and is scheduled to arrive at the orbital laboratory Monday, November 19.

Upon arrival the Expedition 57 astronauts, Serena Auñón-Chancellor of NASA and Alexander Gerst of ESA (European Space Agency), will manipulate the space station’s robotic arm to grapple Cygnus about 5:20 a.m. Installation coverage will then begin at 4 a.m. on NASA Television and the agency’s website.

This Commercial Resupply Services contract mission will support dozens of new and existing investigations as Expeditions 57 and 58 contribute to some 250 science and research studies. Highlights from the new experiments include a demonstration of 3D printing and recycling technology and simulating the creation of celestial bodies from stardust.

Recycling and Fabrication in Space

The Refabricator is the first (ever) 3D printer and recycler integrated into one user-friendly machine. Once it’s installed in the space station, it will demonstrate recycling of waste plastic and previously 3D printed parts already on-board into high-quality filament (i.e. 3D printer ‘ink’). This recycled filament will then be fed into the printer to make new tools and parts on-demand in space. This technology could enable closed-loop, sustainable fabrication, repair and recycling on long-duration space missions, and greatly reduce the need to continually launch large supplies of new material and parts for repairs and maintenance. 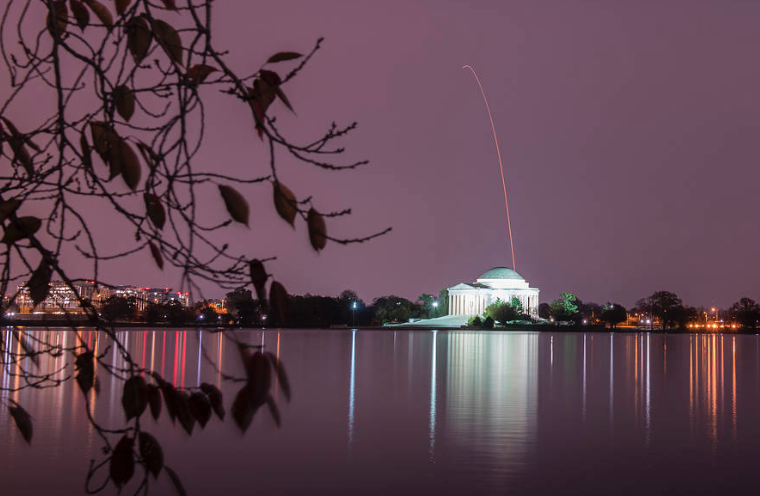 And now for something completely different...
Antares Seen from Washington DC Tidal Basin...
The Northrop Grumman Antares rocket, with Cygnus resupply spacecraft onboard, is seen above the Thomas Jefferson Memorial in Washington, DC, as the rocket launched from Pad-0A at NASA's Wallops Flight Facility in Virginia. Last Updated: November 17, 2018 Editor: Brian Dunbar

Formation of the Early Solar System

The Experimental Chondrule Formation at the International Space Station (EXCISS) investigation will explore how planets, moons and other objects in space formed by simulating the high-energy, low-gravity conditions that were present during formation of the early solar system. Scientists plan to zap a specially formulated dust with an electrical current, and then study the shape and texture of the resulting pellets.

The Crystallization of LRRK2 Under Microgravity Conditions-2 (PCG-16) investigation grows large crystals of an important protein, leucine-rich repeat kinase 2 (LRRK2), in microgravity for analysis back on Earth. This protein is implicated in development of Parkinson’s disease, and improving our knowledge of its structure may help scientists better understand the pathology of the disease and develop therapies to treat it. LRRK2 crystals grown in gravity are too small and too compact to study, making microgravity an essential part of this research. This investigation is sponsored by the U.S. National Laboratory on the space station, which Congress designated in 2005 to maximize its use for improving quality of life on Earth.

The Cygnus spacecraft will remain at the space station until February before its destructive reentry into Earth’s atmosphere, disposing of several thousand pounds of trash. This is the seventh flight of an enhanced Cygnus spacecraft, and the fourth using Northrop Grumman's upgraded Antares 230 launch vehicle featuring new RD-181 engines that provide increased performance and flexibility.

The spacecraft for this mission is named in honor of astronaut John Young. Young was selected for NASA’s second astronaut class and flew during the Gemini, Apollo and Space Shuttle programs. He walked on the Moon during Apollo 16 in 1972 and commanded the first space shuttle mission in 1981. Young passed away in January.

For more than 18 years, humans have lived and worked continuously aboard the International Space Station, advancing scientific knowledge and demonstrating new technologies, making research breakthroughs not possible on Earth that will enable long-duration human and robotic exploration into deep space. A global endeavor, 230 people from 18 countries have visited the unique microgravity laboratory that has hosted more than 2,500 research investigations from researchers in 106 countries.

Keep up with the International Space Station, and its research and crews.