[SatNews]  "This test will see Orion travel farther into space than any human spacecraft has gone in more than 40 years." 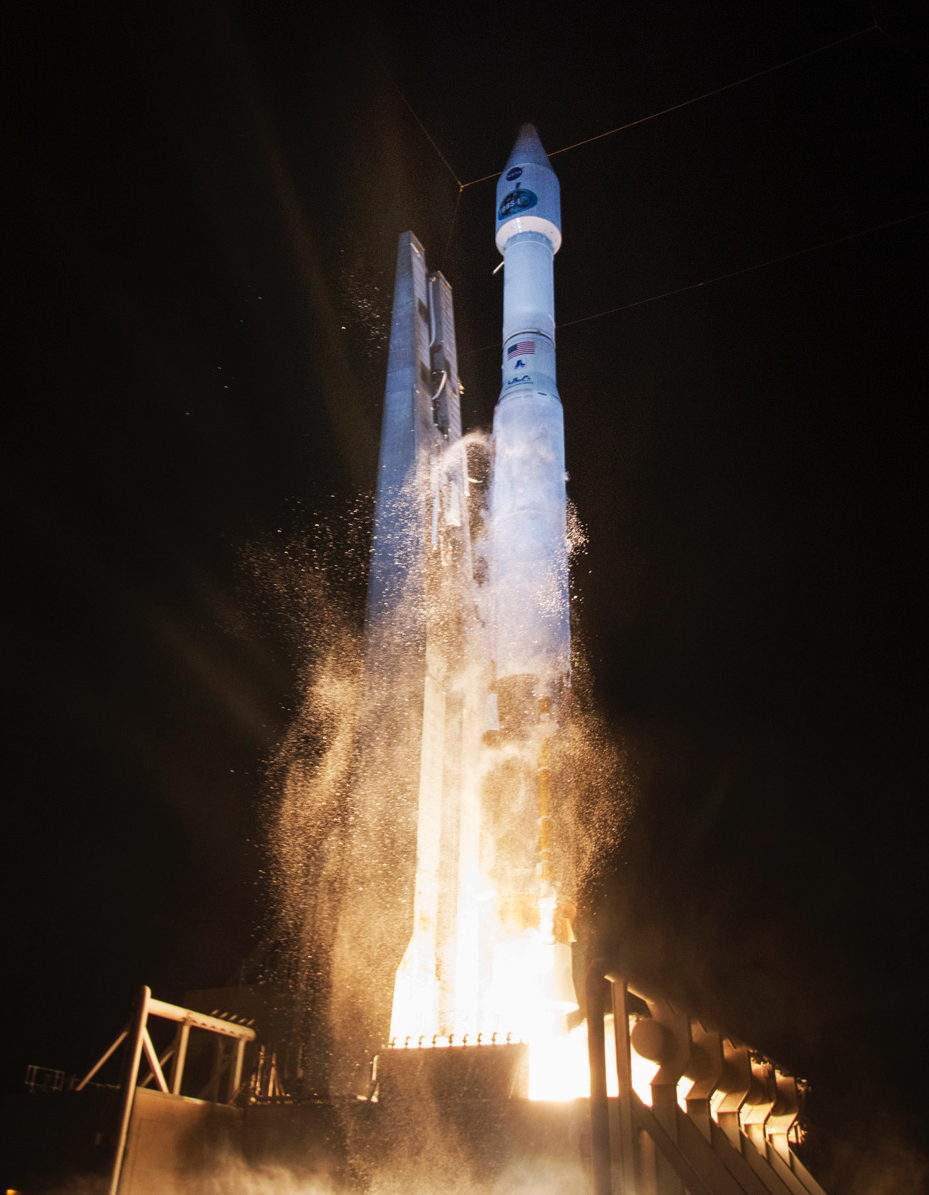 Cape Canaveral Air Force Station, Fla. (Jan. 23, 2014) – A United Launch Alliance (ULA) Atlas V rocket successfully launched NASA’s Tracking and Data Relay Satellite (TDRS-L) payload at 9:33 p.m. EST today from Space Launch Complex-41. This was the first of 15 ULA launches scheduled for 2014 and the 78th ULA launch for ULA in just over seven years. NASA established the TDRS project in 1973, with the first launch in 1983, to provide around-the-clock and around-the-Earth communications for the network that routes voice calls, telemetry streams and television signals from the International Space Station, as well as telemetry and science data from the Hubble Space Telescope and other orbiting spacecraft. Photo by Ben Cooper, United Launch Alliance

"ULA and our mission partners are honored to work with the outstanding NASA team and we are proud of the vitally important data relay capabilities that were safely delivered today,” said Jim Sponnick, ULA vice president, Atlas and Delta Programs. “With 43 successful missions spanning a decade of operational service and launched with a one-launch-at-a-time focus on mission success, the Atlas V continues to provide reliable, cost-effective launch services for our nation’s most complex and valued payloads.”

NASA established the TDRS project in 1973, with the first launch in 1983, to provide around-the-clock and around-the-Earth communications for the network that routes voice calls, telemetry streams and television signals from the International Space Station, as well as telemetry and science data from the Hubble Space Telescope and other orbiting spacecraft.

“Atlas and TDRS have supported each other for almost 20 years, and all three of the second generation satellites, now known as TDRS 8, 9, and 10, launched on Atlas vehicles in 2000 and 2002,” said Sponnick. “While we were integrating those spacecraft onto Atlas in the late 1990s, we also developed a new TDRS-compatible transmitter so that Atlas could use the TDRS constellation to receive and distribute the launch vehicle telemetry relay during flight. We are now also using TDRS services for our Delta II and Delta IV programs.”

Ground controllers report the satellite -- part of a network providing high-data-rate communications to the International Space Station, Hubble Space Telescope, launch vehicles and a host of other spacecraft -- is in good health at the start of a three-month checkout by its manufacturer, Boeing Space and Intelligence Systems of El Segundo, Calif. NASA will conduct additional tests before putting TDRS-L into service.

"TDRS-L and the entire TDRS fleet provide a vital service to America’s space program by supporting missions that range from Earth-observation to deep space discoveries," said NASA Administrator Charles Bolden. "TDRS also will support the first test of NASA’s new deep space spacecraft, the Orion crew module, in September. This test will see Orion travel farther into space than any human spacecraft has gone in more than 40 years." 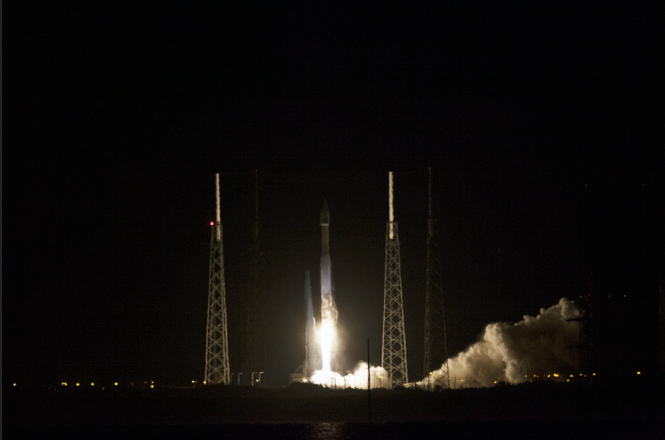 The mission of the TDRS Project, established in 1973, is to provide follow-on and replacement spacecraft to support NASA's space communications network. This network provides high data-rate communications. The TDRS-L spacecraft is identical to the TDRS-K spacecraft launched in 2013.

"This launch ensures continuity of services for the many missions that rely on the system every day," said Jeffrey Gramling, TDRS project manager at NASA's Goddard Space Flight Center, Greenbelt, Md.

The TDRS fleet began operating during the space shuttle era with the launch of TDRS-1 in 1983. Of the 11 TDRS spacecraft placed in service to date, eight still are operational. Four of the eight have exceeded their design life.

Boeing Space and Intelligence Systems completed the TDRS-L integration and testing at its satellite factory in El Segundo in November and launch processing began after the spacecraft arrived in Florida Dec. 6.

TDRS-M, the next spacecraft in this series, is on track to be ready for launch in late 2015.

NASA's Space Communications and Navigation Program, part of the Human Exploration and Operations Mission Directorate (HEOMD) at the agency's Headquarters in Washington, is responsible for the space network. The TDRS Project Office at Goddard manages the TDRS development program. Launch management of the launch service for TDRS-L is the responsibility of HEOMD’s Launch Services Program based at the agency's Kennedy Space Center in Florida.  United Launch Alliance provided the Atlas V rocket launch service.

The Tracking and Data Relay Satellite System (TDRSS) is a space-based communication system used to provide tracking, telemetry, command, and high-bandwidth data return services. The TDRSS, also referred to as the NASA Space Network, consists of satellites in geosynchronous stationary orbits and the associated TDRS ground stations located at White Sands, New Mexico and Guam. Aboard each satellite are multiple antennae that send and receive signals to and from the ground to multiple satellites simultaneously. As a result, the TDRSS provides a wide variety of services to meet customers’ needs and demands. 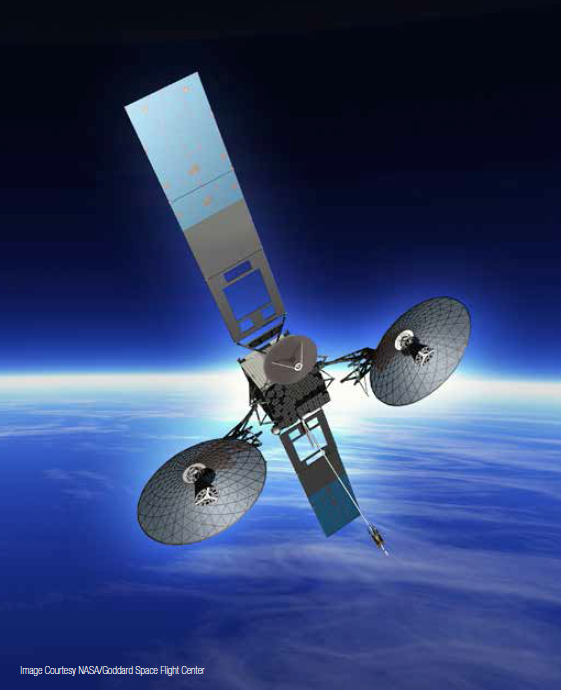 Microwave communications equipment and gimbaled antennae are the primary payload of each TDRS. The TDRSS is capable of providing near continuous high bandwidth (S-, Ku-, and Ka-band) telecommunications services for Low Earth orbiting spacecraft and expendable launch vehicles, including the Hubble Space Telescope and the International Space Station. The TDRS System is a basic agency capability and a critical national resource.

The TDRS-L mission is flown on an easterly trajectory from Space Launch Complex 41 at Cape Canaveral Air Force Station (CCAFS), Florida. The TDRS-L satellite will be released into a highly elliptical geosynchronous transfer orbit (GTO).

The mission begins with ignition of the RD-180 engine approximately 2.7 seconds prior to liftoff. Liftoff occurs at T+1.1 seconds. Shortly after the vehicle clears the pad, it performs its pitch/yaw/roll maneuvers.

Following maximum dynamic pressure, the RD-180 is throttled down to 95 percent. Guidance steering is enabled approximately 120 seconds into flight. At 212 seconds, the vehicle throttles up to a constant 5.0 G-level.

Here's what took place after the launch: Approximately 10 seconds prior to booster engine cutoff (BECO), the Atlas V throttles down to a constant 4.6 G’s. BECO occurs 242 seconds into flight followed by
Centaur separation approximately 6 seconds later.

Approximately 4 minutes into flight, the Centaur stage ignited its main engine (MES-1) which began a 14-minute burn to place the vehicle into a parking orbit.