SSL, a Maxar Technologies company (formerly MacDonald, Dettwiler and Associates Ltd.) (NYSE: MAXR; TSX: MAXR), has announced that the multi-mission Azerspace-2/Intelsat 38 communications satellite has arrived at the European Spaceport in Kourou, French Guiana, where it will be launched aboard an Ariane 5 launch vehicle by Arianespace. 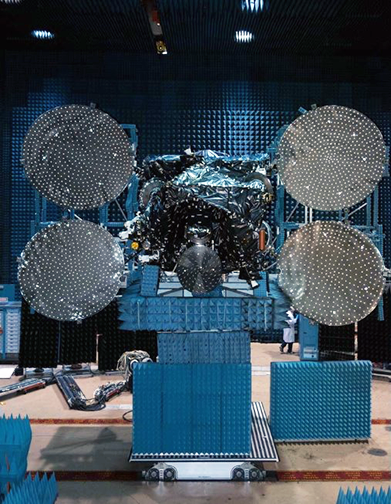 The SSL-built Azerspace-2/Intelsat 38 communications satellite has arrived at the Arianespace launch base.

Image is courtesy of SSL.

Azerspace-2 will help Azercosmos meet the growing demand for Direct-to-Home (DTH) television, government and network services in Europe, Central and South Asia, the Middle East and Sub-Saharan Africa. This is Azercosmos’ second telecommunications satellite and will expand on the service currently available from Azerspace-1.

For Intelsat, the satellite will provide continuity of service for the Intelsat 12 satellite, which was also built by SSL and was launched in 2000. At 45 degrees East, the satellite provides DTH platforms for Central and Eastern Europe as well as the Asia-Pacific region. Intelsat 38 will also provide connectivity for corporate networks and government applications in Africa.

The satellite design is based on the highly reliable SSL 1300 satellite platform that provides the flexibility for a broad range of applications and technology advances. The satellite has a contractual lifetime of 15 years, but actual life may be longer.

Dario Zamarian, the Group President of SSL, said that the delivery of this multi-mission satellite is a strong reflection of SSL’s ability to collaborate as a trusted partner and deliver tailor-made, powerful solutions for complex business cases. “Now SSL's team is working closely with Azercosmos, Intelsat, and Arianespace to prepare the satellite for launch.

Rashad Nabiyev, Chairman and CEO of Azercosmos, noted that the company's collaboration with SSL and Intelsat has been very successfu. This satellite will enhance the firm's capacity, coverage, and service offerings to support growing demand for services and we look forward to its launch with great anticipation.”

Stephen Spengler, CEO of Intelsat, added that SSL has been a trusted manufacturing partner to Intelsat for many years. The new Intelsat 38 satellite payload will enable Intelsat's media customers to deliver enhanced service offerings across Central and Eastern Europe and Asia Pacific and will also provide the broadband connectivity needed to support the services rendered by the company's corporate network and government customers operating in Africa.