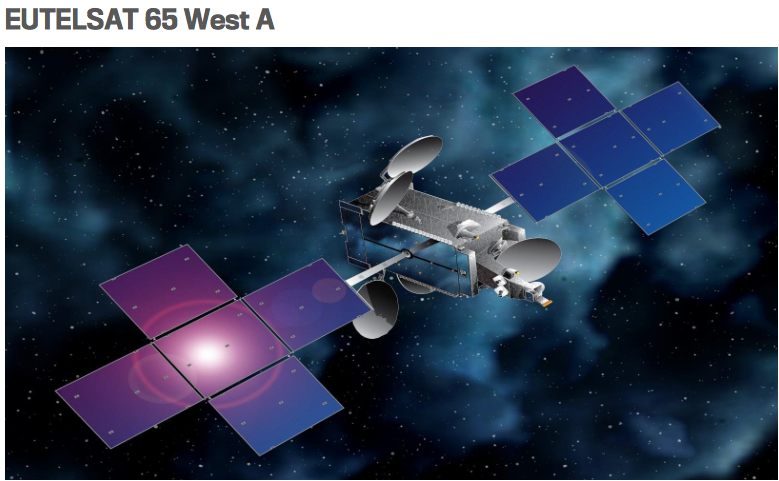 [Satnews] The early morning Arianespace mission with EUTELSAT 65 West A is now underway following Ariane 5’s liftoff from the Spaceport in French Guiana.

Total lift performance for this launch is estimated at 6,707 kg., with the satellite passenger being deployed during a rapid flight sequence of 27 minutes.

Today's flight is designated VA229 in Arianespace's numbering system, signifying the 229th mission of an Ariane-series vehicle to date. Its total payload lift performance is estimated at 6,707 kg., with EUTELSAT 65 West A, which was built by SSL for Paris-based operator Eutelsat Communications, and has a liftoff mass of 6,564 kg being deployed to geostationary transfer orbit during a rapid flight sequence of 27 minutes.

After its release by Ariane 5, EUTELSAT 65 West A was maneuvered to an orbital slot of 65 degrees West, where it is to serve expanding markets in Brazil and across Latin America. The spacecraft combines broad coverage in C- and Ku-bands for video distribution, cellular backhaul and direct-to-home broadcasting with a high throughput payload for broadband access in the Ka-band.

As the second Ariane 5 flight so far in 2016, this week's launch with EUTELSAT 65 West A will continue a busy year of mission activity for Arianespace's full family of launchers, with a combined total of 12 liftoffs planned using the heavy-lift Ariane 5, medium-lift Soyuz and lightweight Vega.