While NASA is counting on an act of Congress or a renegotiated deal with Russia to acquire plutonium for its next robotic deep space missions, the European Space Agency is considering alternative nuclear fuels to power its own probes traveling into the sun-starved outer solar system. 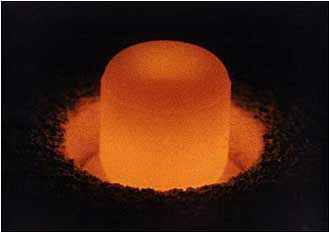 Plutonium-238 in a ground laboratory. Credit: U.S. Department of Energy


NASA's dwindling supply of plutonium-238 nuclear fuel will not be sufficient to power an orbiter to visit Jupiter's moon Europa, NASA's contribution to a planned $4.5 billion joint flagship mission between the U.S. space agency and Europe.

That's unless the U.S. Department of Energy, which supplies nuclear fuel for NASA missions, receives funding to restart domestic production of plutonium or successfully resolves a contract dispute with the Russian government, said Jim Adams, the deputy director of NASA's planetary science division. "If we close another deal with the Russians for another delivery of plutonium-238, or get domestic production restarted, there's sufficient plutonium well out past the Outer Planets Flagship Mission," Adams said in an interview Thursday.

Plutonium is the most efficient way to generate power on deep space probes because solar panels do not receive enough sunlight at such distances. Nuclear-powered spacecraft use Radioisotope Thermoelectric Generators, or RTGs, to produce electricity from the heat of radioactive decay. Recognizing NASA's predicament, David Southwood, ESA's director of science and robotic exploration, said Thursday that Europe would like to start up its own nuclear energy program for space applications.

"To see see ourselves as a serious planetary science partner on the world stage with the United States, we're building up our nuclear capability for European-built RTGs," Southwood said in an interview with Spaceflight Now. "We are building for a pretty major capability being available in Europe in the 2020s."

ESA's nuclear program would likely focus on americium, according to Southwood.

Americium-241 has a longer half-life than plutonium-238, meaning it could survive longer in space, but the isotopes produces less heat and electricity. Americium is also a greater radiation hazard to humans, according to scientists. "Plutonium-238 is an alpha emitter, and you can shield alpha particles with a piece of paper," Adams said. "It's neutrons that damage people, and americium is more a neutron emitter than plutonium-238."

Adams said NASA and DOE have studied alternative isotopes before, but safety officials say Pu-238 is the safest fuel for nuclear-powered spacecraft.

"NASA is committed to plutonium, but you don't always have to go that route," Southwood said. "We're working on the security aspects with the French authorities so we can launch in [Kourou, French Guiana]. We've got a couple of countries with serious nuclear capabilities. The big ones are France and the U.K., so we're talking with them about how to start."

Southwood said he has the budget to start planning, but full development of a nuclear energy program would have to wait for approval in ESA Council meetings in 2011 or 2014. "It's not just putative," Southwood said. "It's in order to have the capability by 2020. Our target is to have an independent capability, which may help our American friends."

Since the U.S. Energy Department stopped producing new plutonium in the late 1980s, only periodic purchases from Russia have replenished the Pu-238 stockpile. The Russian government, which also no longer makes Pu-238, has stopped delivering nuclear fuel to the United States and is requesting a more lucrative contract, officials said.

"The Russian government has indicated that it wants to establish a new agreement for the remaining material available for purchase," said Jennifer Lee, an Energy Department spokesperson. "DOE is currently working with Russia to identify a path forward for completing planned purchases." 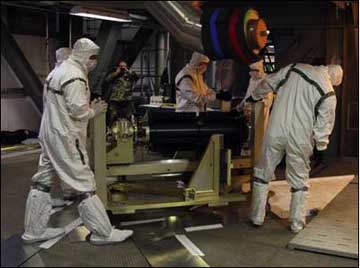 A plutonium-powered RTG before attachment to the New Horizons spacecraft in 2006. Credit: NASA/KSC
Under the White House fiscal year 2011 budget request released in February, NASA and the Energy Department would each receive $15 million next year to restart production of plutonium-238 isotopes. It's unclear whether Congress will approve the spending after denying the Obama administration's similar proposal in 2009.

It would take five or six years to reach full capacity if Pu-238 production is funded, and the total cost would be between $75 million and $90 million, assuming the program used existing facilities, according to Lee. Adams said the joint mission to Jupiter scheduled for launch in 2020 requires more plutonium than is currently in the U.S. government inventory.

"We don't need a lot of it, but [the supply] needs to be steady and reliable," Adams said.

Pu-238 has flown on the two Voyager probes leaving the solar system, the Ulysses solar orbiter, the Galileo mission to Jupiter, the Cassini spacecraft orbiting Saturn, and the New Horizons explorer on the way to Pluto.

The Mars Science Laboratory rover launching next year will also be powered by nuclear energy, and the ExoMars rover planned with European partnership might need a small quantity of Pu-238 in 2018.

With continued demand for Pu-238, NASA is studying ways to ration the precious resource.

The decades-old RTG technology used on current NASA spacecraft has an efficiency of only 8 percent, according to Adams.

"For every 100 watts of heat that I've got, the best I can do is get 8 watts of electricity," Adams said. NASA is developing an Advanced Stirling Radioisotope Generator to improve the efficiency by a factor of four, but there is one critical drawback preventing the new technology from flying to Europa the costly crown jewel of NASA's planetary exploration program.

The Stirling nuclear generator contains moving parts that could limit its usable life, while traditional RTGs are static and are only limited by the half-life of the nuclear fuel.

"The ASRG has these two tiny pistons in them that have to vibrate at 100 hertz for the life of the mission, which could be up to 15 years," Adams said. "So 100 times a second, they're buzzing against each other." According to Adams, an ASRG engineering unit has already been built and has more than four years of problem-free performance at NASA's Glenn Research Center in Cleveland, Ohio.

The new generator design could be ready to fly by 2015, but NASA wants to try out the Stirling technology on a less expensive Discovery-class mission first.

"Are we willing to bet a Europa mission on it? I'll tell you right now I'm not," Adams said.

NASA started the selection process for the next Discovery program mission in June, and the agency expects to select a winner in 2012 for launch as soon as 2015. Adams said NASA is encouraging Discovery proposals to use the ASRG, but it is not a requirement.

"It's an offer from NASA to supply the ASRG at a reduced rate," Adams said. "We'll basically share the costs with the flight project for that system in the event that the mission needs nuclear power to perform the science that's been proposed." 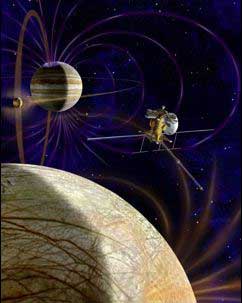 
Discovery missions are science-focused and cost-capped at $425 million. They also have much shorter lifetimes than a flagship-class mission to the outer solar system, meaning the Discovery program is a good proving ground for the Stirling generator before it flies on a more expensive spacecraft.

Under the cooperative Outer Planets Flagship Mission, NASA would build a $3.8 billion probe to orbit Europa, the moon of Jupiter that harbors a sea of liquid water underneath a global ice sheet. ESA would contribute a solar-powered orbiter to study Ganymede, another one of Jupiter's largest moons.

Both spacecraft would start their missions in orbit around Jupiter itself to tour all of the giant planet's moons. Southwood said European space officials will decide whether to approve the Ganymede orbiter sometime next year. It is up against the International X-ray Observatory mission and a gravitational wave finder named LISA for a single $800 million launch slot under ESA's Cosmic Visions program.

You can read this at.