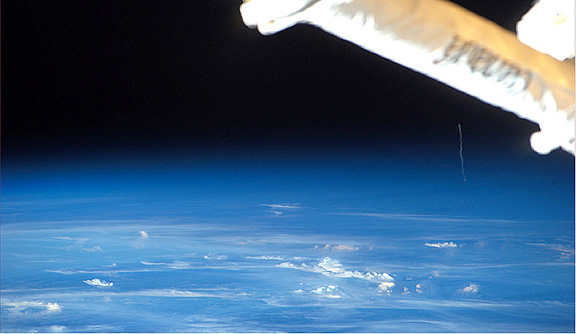 The image shows Ariane 5's rising exhaust trail while the launcher was still in its initial vertical trajectory following an on-time departure from the Spaceport at 6:50 p.m., moments after sunset in French Guiana. Its trail can be seen as a thin streak framed just beneath the International Space Station's remote manipulator arm. Arianespace's launch of the ATV - which is named after German astronomer and mathematician Johannes Kepler - was performed on the 200th flight of an Ariane family vehicle, and its cargo resupply spacecraft was the heaviest payload ever launched by Ariane 5. The ATV Johannes Kepler carries more than seven metric tons of supplies and cargo for the International Space Station, with its docking at the orbital facility to occur on February 24.