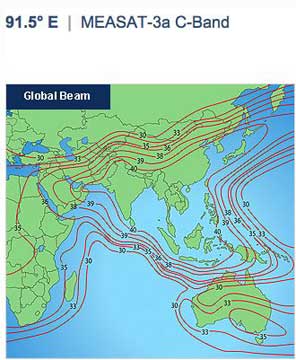 Per the agreement, MEASAT will provide MBNS with 6 Ku-band transponders on the MEASAT-3a satellite for a period of 15 years, which is manufactured by Orbital Sciences in the USA, and is scheduled for launch in June 2009. It will be co-located with MEASAT-3 at MEASAT’s key 91.5°E orbital slot increasing capacity at that hot slot by 50 percent. The agreement is valued at US$189.2M.

“MEASAT-3a has been built to work in tandem with MEASAT-3 to support the growth plans of our existing customers,” said Terry Bleakley, MEASAT’s Vice President, Commercial Operations. “We are delighted to be able to support ASTRO as they expand their services.”

MEASAT is a supplier of satellite communication solutions to Asia’s leading broadcasters, DTH platforms and telecom operators. Operating three satellites, the MEASAT fleet is able to provide satellite capacity over 145 countries representing 80 percent of the world’s population across Asia Pacific, Middle East, Africa, Europe and Australia. The fleet will be further enhanced with the launch of MEASAT-3a, providing additional capacity and in-orbit redundancy at the Company’s key 91.50E orbital video slot.