[SatNews] "It is one of the few Australian enterprises that were started in the dot com boom that look like becoming a major force"...and just in time for CommunicAsia this next week...

Don’t let the good news from Greece overshadow a significant announcement from the export banking arm of the US government, which is recommending to the US Congress that America advance $US280 million to an Australian company to start a new infrastructure sector for our country – the operation of satellites for military and resource communication.

And yet again we see that in the non-resource sector, innovation in Australia is coming smaller enterprises rather than the corporate giants.

After six months' due diligence, the US Ex-Im Bank is supporting Australia’s NewSat, a specialist satellite communications company, to enable it to finance the construction of the Jabiru-1 satellite being built by Lockheed Martin. NewSat says that following a 35 day Congressional notification and comment period, NewSat’s application is eligible for a final vote on approval. 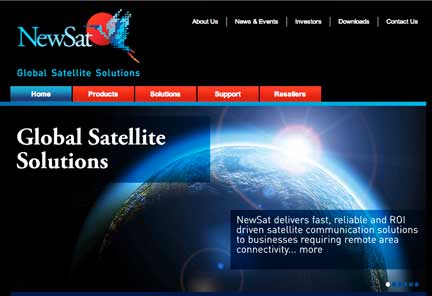 The US is set to back NewSat and Lockheed because NewSat has secured $US601 million in binding pre-launch customer contracts, which locks in the cash flow for the satellite. Most of the orders have come from the Middle East and Asia. The NewSat satellite will be launched by the French group Arianespace, and NewSat also needs funding from the French Import-Export Bank Coface (Compagnie Française d'Assurance pour le Commerce Extérieur) to fund that launch. Coface was privatised in 1996 and is now part of France’s second largest bank, BPCE. With the backing of the US bank and the advanced contracts, French backing is not expected to be a problem, although a European banking crisis might cause delays.

NewSat will also need some syndicated loans and equity to fund about 20 per cent of the project. How could a small Australian company with a capitalisation of less than $200 million gain so much international support?

First, NewSat has been operating so-called teleports, which manage satellite data for US armed forces in Afghanistan and Iraq, plus a range of American enterprises in the Middle East. While some work is undertaken for the Australian defence force, the Australian military prefers Chinese satellite connections to the local teleport service.

Having recognition by the US military for its teleports was an enormous advantage for NewSat in securing advanced commitments for its satellite and gaining the backing of the US Ex-Im Bank.

To gain this level of support also requires entrepreneurship. The NewSat company has its origins in the dot.com boom of 2000 and chief executive Adrian Ballintine has stayed with the group for the long haul. It is one of the few Australian enterprises that were started in the dot com boom that look like becoming a major force (The sky's no limit for NewSat, September 6). NewSat has an incredible eight satellite spots so when the Jabiru-1 satellite project is in place NewSat will begin assembling advanced commitments for a second and then a third satellite.

Australia now looks set to be an important player in the global space race. But the initiative did not come from Canberra – in fact, they supported China over Australia. Instead it came from the private sector.

In today’s world it is the only way to go.