[SatNews] Up, off and away! 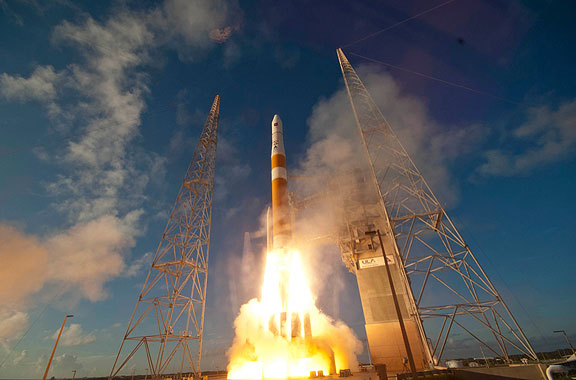 United Launch Alliance’s Delta IV rocket has launched from Cape Canaveral early on Thursday, carrying a Global Positioning System (GPS) satellite for the United States Air Force. The launch was on schedule at the start of a 19-minute window that opened at 12:10 UTC (08:10 local time). However, mission success will not be recorded until after a multi-hour trip into space.

“Congratulations to the entire team on today’s successful launch of the GPS IIF-3 satellite,” said Jim Sponnick, ULA vice president, Mission Operations. “ULA and our mission partners have a rich heritage with the GPS program and we are proud to have served alongside the government and contractor teams over the last two decades to provide important Global Positioning System capabilities for our national defense and for millions of civilian and commercial users around the world."

This mission was launched aboard a Delta IV Medium-plus configuration vehicle using a ULA single common booster core powered by a Pratt & Whitney Rocketdyne RS-68 main engine, along with two Alliant Techsystems GEM 60 solid rocket motors. The payload was encapsulated by a composite payload fairing and powered by the four-meter diameter upper stage using the PWR RL10B-2 engine. The GPS IIF-3 launch marked the ninth flight of the Delta IV medium+ (4,2) configuration and the 21st flight of the Delta IV family of launch vehicles.

“We are honored to be the primary launch provider for our nation. Reliability, quality, and on-time performance are ULA’s hallmarks,” said Sponnick. “Our nation’s soldiers, sailors, airmen, and Marines rely on our performance in accurately placing our customer’s critical payloads in their required orbits.”

The Navstar GPS is a constellation of satellites that provides navigation data to military and civilian users worldwide. The system is operated and controlled by the 50th Space Wing, located at Schriever Air Force Base, Colorado.

Today's launch marks the first launch of a GPS satellite this year. SVN-65 will assume position A-1, replacing SVN-39 which will be moved to another auxiliary position in the A-plane. The satellite is expected to be set healthy for navigation users approximately 90 days after launch to conduct an extended navigation signal test.

"We, of course, are incredibly pleased with the successful outcome of today's launch. Thanks to the tireless efforts of the 45th and 50th Space Wings, United Launch Alliance, our industry partners, and the Delta IV and GPS IIF launch teams, this morning's launch was flawlessly executed. The talented group of individuals carried out the GPS IIF-3 mission with great diligence and professionalism," said Colonel Bernie Gruber, director of the Space and Missile Systems Center's Global Positioning Systems Directorate.

Since its inception, GPS has progressed from an idea, to a prototype, into a reality. "It's an amazing component of today's technical capabilities and culture, and shows how important our space systems have become to our defense and to our way of life. An incredible number of people around the globe use and depend daily upon GPS and we are proud to serve and provide this service to the nation and our allies," said Col. Gruber. The new capabilities of the IIF satellites will provide greater navigational accuracy; a more robust signal for commercial aviation and safety-of-life applications, known as the new third civil signal (L5); and a 12-year design life providing long-term service. These upgrades improve anti-jam capabilities for the warfighter and improve security for military and civil users around the world.

The Air Force, as the developer, operator, and steward of GPS is committed to maintaining GPS as the "Gold Standard" for providing accurate, reliable and continuous positioning, navigation and timing information to users around the globe.

GPS utilizes 24 satellites, in six different planes, with a minimum of four satellites per plane, positioned in orbit approximately 11,000 miles above the Earth’s surface. The satellites continuously transmit digital radio signals pertaining to the exact time (using atomic clocks) and exact location of the satellites.

The GPS IIF series have a design life of 12 years. With the proper equipment, users can receive these signals to calculate time, location, and velocity. The signals are so accurate that time can be measured to within a millionth of a second, velocity within a fraction of a mile per hour, and location to within feet. Receivers have been developed for use in aircraft, ships, land vehicles, and to hand carry. 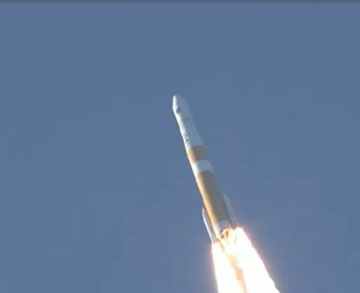 As a result of increased civil and commercial use as well as experience in military operations, the USAF has added the following capabilities and technologies to the GPS IIF series to sustain the space and control segments while improving mission performance:

Well wishes from Mission Operations...
The ULA team is proud to be the launch provider for the U.S. Air Force (USAF) Global Positioning System (GPS) Directorate by delivering replenishment satellites aboard Atlas V and Delta IV launch vehicles. GPS satellites serve and protect our warfighters by providing navigational assistance for U.S. military operations on land, at sea, and in the air. Civilian users around the world also use and depend on GPS for highly accurate time, location, and velocity information.

GPS IIF-3 is one of the next generation GPS satellites, incorporating various improvements to provide greater accuracy, increased signals, and enhanced performance for users.

The ULA team is focused on attaining Perfect Product Delivery for the GPS IIF-3 mission, which includes a relentless focus on mission success (the perfect product) and also excellence and continuous improvement in meeting all of the needs of our customers (the perfect delivery). We sincerely thank the entire team, which consists of the USAF, The Aerospace Corporation, ULA, and major suppliers of ULA, for their continued hard work, and commitment to mission success and perfect product delivery.

GPS Satellites serve and protect our warfighters by providing navigational assistance for U.S. military operations on land, at sea, and in the air. Civilian users around the world also use and depend on GPS of highly accurate time, location, and velocity information. GPS IIF-3 is one of the next generation GPS satellites, incorporating various improvements to provide greater accuracy, increased signals, and enhanced performance for users. 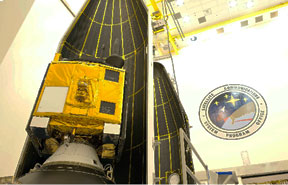 FLIGHT-PROVEN CAPABILITY
Since its first launch in 2002, the Delta IV has successfully demonstrated its ability to launch high-priority USAF, National Reconnaissance Office, NASA and commercial payloads to orbit. With launch pads on both the East and West Coasts, every Delta IV configuration is available to service the requirements of current and future satellite programs.

50-YEAR DELTA HERITAGE Since 1957 the Delta rocket, and its predecessor Thor, have carried satellites into orbit that have brought our world closer together and helped deepen our understanding of the universe.


Commonality in the common booster core, built in a factory equipped with state-of-the-art manufacturing techniques.

Use of proven heritage hardware, software and processes from Delta II, the industry workhorse

Efficient launch site processing, with off-pad horizontal integration of the vehicle and parallel processing of the payload