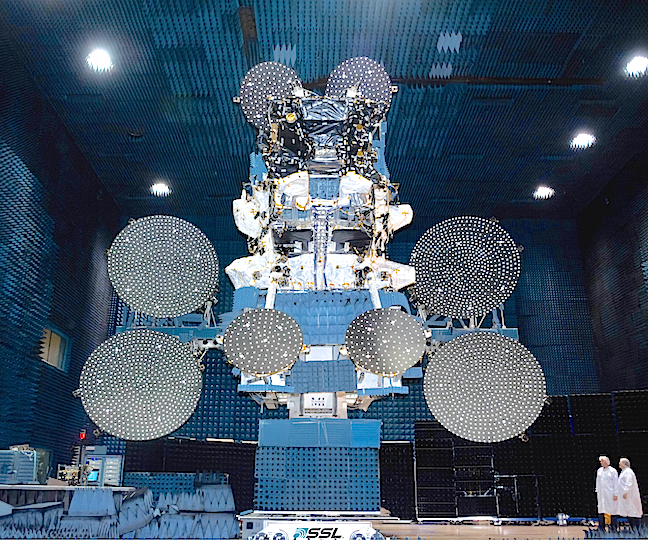 Never a dull moment at Arianespace's facility in French Guiana, this time readying for the launch of The Sky Muster™ II.

Although the launch isn't until October, there is much to be accomplished before the Sky Muster™ II, a high-performance broadband satellite, has begun its pre-launch preparations, initiating a process leading to this large spacecraft orbiting in October on an Arianespace dual-passenger Ariane 5 mission. The two Sky Muster relay platforms are designed to deliver nbn's advanced services for some of the most difficult to reach citizens in Australia, from mainland Australia and Tasmania to the offshore islands.

Built by SSL (Space Systems Loral) for Australia's national broadband network (nbn™), Sky Muster II is in the Spaceport's S5 payload processing facility, where it underwent a fit-check with the adapter that will serve as the interface when integrated with Ariane 5.

As with nbn's first Sky Muster satellite, which was launched in September 2015 on another Ariane 5 flight, Sky Muster II is a Ka-band, high-throughput broadband satellite. It will utilize advanced-design multiple spot beams to optimize bandwidth for Australia's widely-distributed population.

Sky Muster II is based on SSL's 1300 spacecraft platform, and will have a liftoff mass of approximately 6,400 kg. (14,110 pounds) for October's Ariane 5 mission, which is designated Flight VA231 in the Arianespace launcher family numbering system.

The co-passenger with Sky Muster II on Flight VA231 will be India's GSAT-18 telecommunications satellite, developed by the Indian Space Research Organization (ISRO). With a liftoff mass in the 3,400-kg. (7,496 pounds) category, GSAT-18 continues India's long history of launching its payloads on Ariane vehicles, which dates back to 1981.